For Immediate Release
Office of the Press Secretary
March 17, 2008

PRESIDENT BUSH: Taoiseach, welcome, and Happy St. Patrick's Day. It's always a joy to welcome the Taoiseach here to the Oval Office. And it's a reminder of the unbelievably powerful influence the Irish have had on the development and prosperity of the United States of America. We're a richer country because of Irish Americans. And Mr. Prime Minister, Ireland is a great friend and ally, and I want to thank you for your friendship over these years. 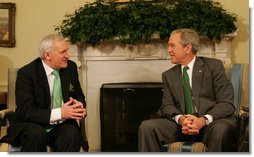 We discussed a variety of issues. In particular, we talked about Northern Ireland, and the Taoiseach gets a lot of credit for showing a steady hand during a difficult period. And yet, as a result of perseverance and hard work, Northern Ireland is a different place than it was last year. And we congratulate the leaders there. And I just want the folks to know what I told the Taoiseach is true, that the United States will continue to stay engaged and will be very supportive of helping the process move forward.

So thanks for coming. Thanks for your friendship. And once again, Happy St. Patrick's Day.

PRIME MINISTER AHERN: Thank you very much, President. And I want to thank the President, it's the eighth year that he's afforded us the opportunity of representing the Irish people here. And always, we've had a very fruitful discussion on a range of issues. And obviously important to me is the ongoing process in Northern Ireland. And the President and his people have been really helpful as we move now to the remaining issue, (inaudible) policing, which we've discussed.

And the investment conference which is just around the corner, is a -- I've said it several times before, the investment conference is really a one-off chance, an opportunity for Northern Ireland to bring some of the big investors of the world to see the opportunities that are there, the opportunities that they had not had a chance of being able to get any benefit from for the last 30 or 40 years, and now they have that. And I think it will show Northern Ireland is a place with well-educated people, hard-working people, people who are good at business if given half a chance.

And it is hugely important to us that in the organization of this that the President has helped both the British government and the Irish government to get this together. We've gone through that today, and I think the (inaudible) of the President to make sure that there's a high-powered delegation to United States is hugely helpful. I want to thank President for that. 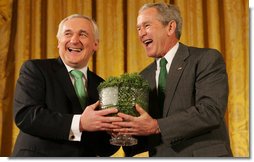 And I always want to thank him for the assistance that he's given to us on a range of issues that we've had the opportunity of talking about. Thank you very much.

PRESIDENT BUSH: Thanks for coming.