For Immediate Release
Office of the Press Secretary
March 17, 2008

THE PRESIDENT: Mr. Secretary, thank you very much for coming by today to talk about the economic situation -- we'll be meeting later on this afternoon with the President's Task Force on Financial Markets.

First of all, the Secretary has given me an update. One thing is for certain -- we're in challenging times. But another thing is for certain -- that we've taken strong and decisive action. The Federal Reserve has moved quickly to bring order to the financial markets. Secretary Paulson has been -- is supportive of that action, as am I. And I want to thank you, Mr. Secretary, for working over the weekend. You've shown the country and the world that the United States is on top of the situation. 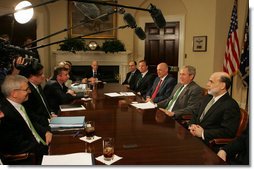 Secondly, you've reaffirmed the fact that our financial institutions are strong and that our capital markets are functioning efficiently and effectively. We obviously will continue to monitor the situation and when need be, will act decisively, in a way that continues to bring order to the financial markets.

In the long run, our economy is going to be fine. Right now we're dealing with a difficult situation and, Mr. Secretary, I want to thank you very much for your steady and strong and consistent leadership.