For Immediate Release
Office of the First Lady
March 14, 2008

MRS. BUSH: Well, it is really important to have the mobile mammography units as well. I know in rural parts of our state, in Texas and Arizona and those states that have very remote and rural communities without really good medical care -- maybe a clinic -- that the rural -- that those mammography units that drive around and make a -- have a very systematic route so that they get to every community once a year, and people at least can get a mammogram. 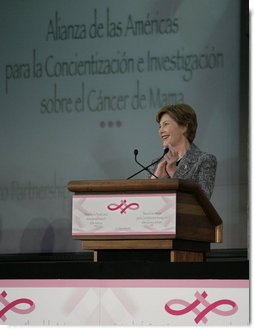 But then, of course, where they go after that is also a problem in the United States.

I don't know if you all have this as your last picture, but this doctor right here, from Saudi Arabia in the black robe with the pink ribbons, her husband left her when she was diagnosed with breast cancer. But her two children have written books for other children about what to expect if your mother is diagnosed with breast cancer. And she's been very active in Saudi Arabia, reaching out to women who also are -- would never admit if they had breast cancer, both because of the stigma and because they are afraid their husbands would leave them.

But that's part of this whole idea of the partnership and the Susan G. Komen Foundation and training community workers, and that is to reduce the stigma. People don't get breast cancer because they did something wrong, and it's not contagious. No one is going to catch it from you. And we really need to educate people -- and men need to be educated, too. 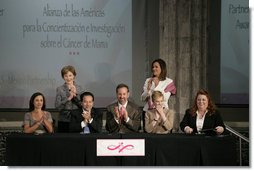 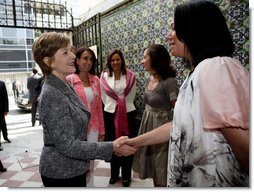 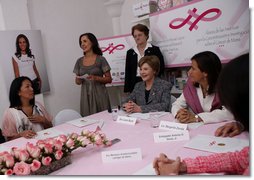