For Immediate Release
Office of the First Lady
March 13, 2008 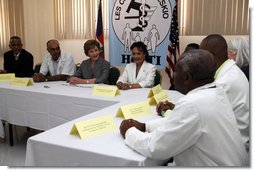 So it's a nice chance to get to be with you all today to see the results of what you all have built and how it's helping people, while this is being discussed in the United States Congress.