For Immediate Release
Office of the First Lady
March 12, 2008

I also want to acknowledge the chairman, co-chairman of today's event, Hadassah Lieberman and Robin Jeffery. Thank you all very, very much for getting this group together of women -- and men, I noticed a few -- (laughter) -- from around the world. Thank you a lot for that. And of course I want to recognize Ambassador Nancy Brinker and the members of the diplomatic community who have joined us today. Thank you very much for being here as well. 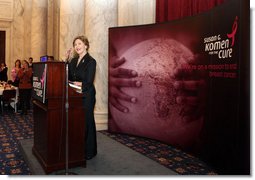 I'm happy to be here with each one of you breast cancer advocates and survivors. Together we can save women's lives by raising awareness of breast cancer around the world. Over the next quarter-century, an estimated 25 million people worldwide will be diagnosed with breast cancer, which is why it's so important for people from every country to share their knowledge and their experience.

Twenty-five years ago, discussing breast cancer in the United States was taboo. Women didn't know how to protect themselves. And because they didn't get regular mammograms or do breast self-exams, breast cancer was often diagnosed too late.

A lot has changed in 25 years. Americans are fortunate to have so many advocates, like First Ladies Betty Ford and Nancy Reagan, who made their bouts with breast cancer public -- and, of course, my friend and Chief of Protocol Ambassador Nancy Brinker.

In 1982, Nancy started the Susan G. Komen for the Cure in honor of her sister Suzy, who had died of breast cancer at age 36. Nancy Brinker has been a friend of mine and an inspiration to many since those early days of the Komen.

I volunteered for the Komen organization when George and I lived in Dallas. Every year then, the Komen Foundation would host a huge fundraising lunch, and I'd choose to be the invitation chairman, because Nancy had already sold the luncheon out -- (laughter) -- so all we had to do was address the invitations to people who'd already said they were going to come. (Laughter.) Friends would gather at my house, and we'd have lunch and tell stories and address envelopes.

Thanks to the Komen organization, today millions of volunteers volunteer their time and energy to the Race for the Cure. And all Americans know what the pink ribbon stands for.

In many countries today, though, breast cancer is still kept a secret, and the measures to detect and treat it are a mystery. This October, I traveled to the Middle East to promote the U.S.-Middle East Partnership for Breast Cancer Awareness and Research. This initiative joins the Susan G. Komen for the Cure, the U.S. State Department, and doctors from the University of Texas M.D. Anderson Center with partners in the United Arab Emirates, Jordan, and Saudi Arabia. Like American women 25 years ago, many Arab women don't get yearly mammograms or perform self-exams. If they have breast cancer, they're often too ashamed to tell anyone. 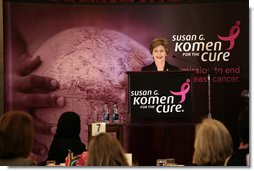 About 70 percent of the cases of breast cancer diagnosed in Saudi Arabia are detected in advanced stages, compared with only 30 percent or fewer here in the United States. We don't know why, but breast cancer seems to present about 10 years earlier in Arab women than in Western women. So many women don't benefit from early detection and aggressive treatment, which, as everyone knows, the closest we've come to a cure.

In Riyadh, Dr. Al-Amoudi showed me the Abdullatif Cancer Screening Center. Since my visit, the Komen organization started a Course for the Cure program. They've trained 78 Saudi women, in four cities, to reach out to other women in their communities. And today, the number of patients seeking breast cancer screenings at the Abdullatif center has more than quadrupled since just a few months ago, from about six patients a day to now 25 patients a day.

Through similar partnerships, the Komen organization is strengthening ties between sisters around the world. On Friday, in Mexico City, I'll help launch the U.S.-Mexico Partnership for Breast Cancer Awareness with the First Lady of Mexico, Margarita Zavala.

About 4,200 women die from breast cancer every year in Mexico. And incidence has increased over the last six years. Due to poverty and to a lack of education, more than 60 percent of cases are diagnosed in later stages. Susan G. Komen for the Cure, the U.S. State Department, and M.D. Anderson Cancer Center will work with the Instituto Nacional de Cancerlogia, and the Mexican Association Against Breast Cancer, to advance research and awareness throughout the country.

Today, American women talk openly about breast cancer -- often, like my mother, Jenna Welch, to tell stories of triumph. Recently, the grandson of a 50-year breast cancer survivor wrote a letter to the President to share his mother's accomplishment. When his grandmother was first diagnosed in 1958, at age 36, she was given six months to live. Today at 86, he said one of her prized possessions is a photograph with George at an early Komen Race for the Cure, when George was governor of Texas. (Laughter.)

Work that started in a living room in Dallas 25 years ago is saving the lives of women in Budapest, Dubai, Guadalajara, Jeddah, Rome, and other cities around the world. After her sister Susan died, Nancy Brinker lay in bed at night wondering how she could make a difference. How could one young woman change the way the entire world confronted a deadly disease?

Twenty-five years later, and halfway around the world, Dr. Al-Amoudi offered the answer: "I'm only one woman, but together we're a force to be reckoned with." (Applause.)

This is the story of Susan G. Komen for the Cure. Started with one sister's pledge, and today the efforts of millions, you are a force to be reckoned with.

I'm proud to be part of this historic campaign for good health for women worldwide. And I urge all the members of the diplomatic community who have joined us today to make breast cancer education and outreach priorities in your own countries. You can help break the silence.