For Immediate Release
Office of the Press Secretary
March 7, 2008

THE PRESIDENT: Earlier today I spoke with members of my economic team. They updated me on the state of our economy. This morning we learned that our economy lost 63,000 payroll jobs in February, although the unemployment rate improved to 4.8 percent.

Losing a job is painful, and I know Americans are concerned about our economy; so am I. It's clear our economy has slowed, but the good news is, we anticipated this and took decisive action to bolster the economy, by passing a growth package that will put money into the hands of American workers and businesses. 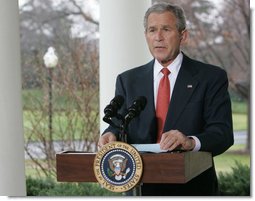 I signed this growth package into law just three weeks ago, and its provisions are just starting to kick in. First, a growth package includes incentives for businesses to make investments in new equipment this year. These incentives are now in place, and they are starting to have an impact. My advisors tell me that investment in new equipment remains solid thus far in the first quarter.

And as more businesses take advantage of these new incentives, as well as lower interest rates, we expect investment will continue to grow, and that businesses will begin creating new jobs in the months ahead.

Secondly, the growth package will provide tax rebates to more than 130 million American households. These rebates will begin reaching American families in May. And when the money reaches the American people, we expect they will use it to boost consumer spending, and that will spur job creation, as well.

We believe that the steps we have taken, together with the actions taken by the Federal Reserve, will have a positive effect on our economy. So my message to the American people is this: I know this is a difficult time for our economy, but we recognized the problem early, and provided the economy with a booster shot. We will begin to see the impact over the coming months. And in the long run, we can have confidence that so long as we pursue pro-growth, low-tax policies that put faith in the American people, our economy will prosper.