For Immediate Release
Office of the First Lady
March 7, 2008 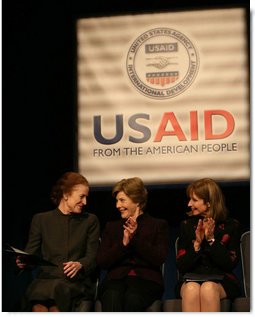 I'm delighted to be here for this celebration of International Women's Day. Today we salute women whose triumphs are written bold on the pages of history. And we call attention to those for whom the pages have yet to be written -- women from Afghanistan to Zanzibar, who work to achieve a better life and equal rights for girls around the world. And with our help, I believe that we'll all ultimately succeed.

The United States and our partners are bringing more opportunities to women and children worldwide in the form of health and education initiatives.

I serve as the Honorary Chair of the U.S.-Afghan Women's Council, and I've enjoyed meeting with Afghan women who've returned to school or are attending school for the first time since the fall of the Taliban. I had the opportunity to visit the Afghan Women's Teacher Training Institute in Kabul, where women have a safe place to live while they study to become teachers. Nearly 500 women have graduated since the school opened in 2004. Many of these women have returned to their home provinces to train other teachers and to help open and staff new schools in Afghanistan.

Two years ago, the American University of Afghanistan was established. Today, 380 students are enrolled, and they study everything from business and management to information technology.

Afghan's educational institutions and the Afghan Women's Council are responsible for this remarkable progress over the last five years. And I want to thank the Council's co-chair, Under Secretary for Global Affairs Paula Dobriansky, for your hard work and your leadership on the Council. Thank you very much, Paula.

In Africa, we see similar progress. I've made five trips to Africa and visited 14 countries over the last seven years. Last month, President Bush, Secretary Rice, and I visited again, and we had a chance to see the early success of some of this important work.

The President's Africa Education Initiative, or AEI, has awarded scholarships to more than 300,000 students in more than 30 sub-Saharan countries. Most of these scholarships are for girls. Through AEI, more than 600,000 teachers have been trained, and more than 8 million new textbooks and other materials are now in classrooms across the continent. 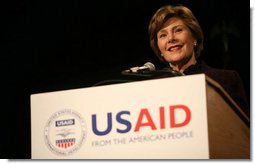 In Nigeria, I met a girl named Glory, who is an AEI scholarship recipient. Glory told me her greatest ambition in life was to become a medical doctor. And during a roundtable discussion with women leaders, one of the women in the group said, you know, the sky is not the limit when it comes to women's empowerment, because "there's always Mars." (Laughter.) She and all of us believe that anything is possible within the realm of possibilities for girls and women.

In Madagascar, AEI initiative called the Ambassador's Girls Scholarship program awards 1,000 scholarships a year to girls who are eager to learn and are willing to walk miles for the privilege of attending school. The girls are paired with mentors -- female role models who are teachers, doctors, politicians, hairdressers, or heads of factories. The initiative has earned another important distinction: In Madagascar, it's the first non-governmental organization to be run by a woman.

Education is closely linked with economic growth and progress. But education can succeed when people are in good health. The United States has developed global health initiatives such as PEPFAR, which addresses AIDS and other diseases, such as malaria, in Africa. Next week I'm going to visit Haiti, and I'll visit an internationally recognized HIV and AIDS treatment center called GHESKIO.

I'll also have a chance to see a great educational initiative at work. It's a USAID-funded program called IDEJEN, and it combines instruction in reading, writing, and math with vocational training. Right now IDEJEN reaches 2,200 children -- and more than half of them are girls. But they have plans to reach more than 13,000 children by 2010.

Breast cancer is a very serious problem among Arab women. And it presents -- we don't know why -- but many times earlier, about 10 years earlier thank it presents in Western women. Hopefully a lot of this research will be able to discover -- with M.D. Anderson -- will tell us why and what the causes are. But also the main purpose -- and this was part of our partnership with the Komen Foundation -- is to get the word out about breast cancer to women in the Middle East who don't talk about breast cancer because, of course, they don't talk about breasts, just like we didn't in the United States about 25 years ago, until Betty Ford made her bout with breast cancer public, and then later Nancy Reagan did. And then Nancy Brinker, our Chief of Protocol, started the Komen Foundation in honor of her sister Susan, who had died of breast cancer.

All of that led to breast cancer awareness in the United States, which means most women know to get a yearly mammogram after the age of 40, and that's what we're hoping will get the word out, that we'll be able to get the word out through this partnership to these countries in the Middle East.

Next week I'll also join Mexico's First Lady for the official launch of the U.S.-Mexico Partnership for Breast Cancer Awareness and Research.

Around the world, we see and celebrate improvements in health care and education. In Africa and the Middle East, we can see that in many places, women are just a step away from greater opportunities and equality.

But as we celebrate this International Women's Day, we can't forget our sisters in those parts of the world who are still oppressed by brutal regimes of their government.

The people of Burma deserve a real opportunity to express their views on the proposed constitution that the regime is proposing right now. The opportunities that you and I enjoy every day do not belong to us alone. They belong to every person in every country. And I urge all of you to join me in speaking out for the rights of our sisters in Burma and Cuba and Belarus and other parts of the world where women are still oppressed.

Our efforts to improve health and education, to build partnerships and greater understanding, are paying off. Today we celebrate some of these triumphs, because they're triumphs for all of us. Here in the United States, women fought their own battles so that you and I can stand together and proclaim with proud voices that liberty is ours today. We're limited only by the boundaries of our imagination. And for all of us, that means the sky is not the limit. Mars is still out there. (Laughter.)

We're here today to tell our sisters around the world that we want them to join us. We're here to tell them that the long walk to freedom and equality, even though sometimes it might be a tiresome journey, that it's worth it. And the women of the United States are with them every single step of the way.

Freedom is worth fighting for, and so are the women of the world. Thank you all very much. (Applause.)