For Immediate Release
Office of the Press Secretary
March 6, 2008

THE PRESIDENT: Sitting next to me is Mr. Frank Buckles, 107-years-young, and he is the last living Doughboy from World War I. And it has been my high honor to welcome Mr. Buckles, and his daughter, Susannah, here to the Oval Office.

Mr. Buckles' mind is sharp, his memory is crisp, and he's been sharing with me some interesting anecdotes. I asked him where he lived, and he said, that reminds me of what General Pershing asked me. And he told the General that he was raised on a farm in Missouri. And the General said, well, you know, as the crow flies, it's 40 miles from where I was raised. 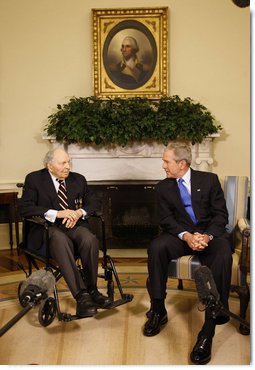 And so Mr. Buckles has a vivid recollection of historic times. And one way for me to honor the service of those who wear the uniform in the past and those who wear it today is to herald you, sir, and to thank you very much for your patriotism and your love for America.

So we're glad you're here. Thanks for coming. 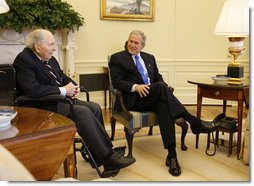