For Immediate Release
Office of the First Lady
March 5, 2008

Mrs. Bush's Remarks at the 2008 Annual Meeting of the Association of American Publishers
The Yale Club
New York, New York

MRS. BUSH: Thank you very much, Pat. This is a crowd that I'm going to really have a great time speaking to, although I guess I'll be preaching to the crowd, because I know you all share my same interest.

Members of the AAP board and the publishing industry, I'm so happy to be here with you today. So many of you are responsible for the greatest love affairs of my life -- books, of course. I have a special place in my heart for many of the authors and characters you represent. 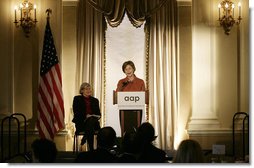 My earliest memories are from characters that spring from the pages of books. And many of those characters have remained my lifelong companions. I'll always remember my first cruise on Katherine Anne Porter's "Ship of Fools." And I'll cherish the time I spent with an intriguing man named Gatsby. I loved my brothers Karamazov, and it's tragic but true, I still play favorites with my sisters Charlotte and Emily.

Sadly, the real tragedy is that a substantial number of adults and a growing number of children don't know these characters, or the many other characters that enrich all of our lives.

In 2001, a Washington Post article on illiteracy and aliteracy reported a decline in reading and reading proficiency across the board, and warned of the consequences. Three years later, the National Endowment for the Arts reported that fewer than half of Americans 18 and older read novels, short stories, plays or poetry. And for us bookworms, those are the four basic food groups. (Laughter.)

Our youngest age groups have the steepest decline -- of nearly 30 percent. The results are obvious at home and in school. Reading scores are flat among middle-schoolers and declining among high school seniors. That's not because they can't read, it's because they think they don't enjoy reading.

Studies continue to show that how much children read determines how well they do in school. It also determines how long they stay in school and how far they go in higher education, and what cultural and recreational activities they participate in as adults.

Ray Bradbury was right when he said, "You don't have to burn books to destroy a culture. Just get people to stop reading them."

Both reading, and a love of reading, are learned behaviors that should be taught at home and in schools. Like many of you in this room, I've spent my life in the company of good books, because my mother taught me to love them, and my teachers taught me to read them, and my library let me take them home free. 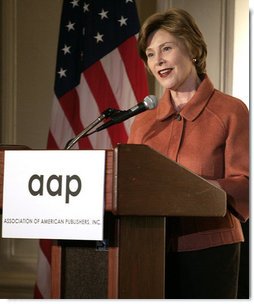 Those early experiences had a profound impact on my life, and on my career as a public school teacher and librarian, and on my present work in the U.S. and around the world. I've worked to promote an innovative pediatric literacy program called Reach Out and Read, which pairs pediatric health care and literacy at hospitals and clinics.

Thanks to many of you in this room, I helped found the Texas Book Festival, which has become a huge success, now in its 13th year. And that led to the National Book Festival. Both festivals celebrate the art of writing and the joy of reading. My hope is that the momentum behind the National Book Festival will continue long after President Bush and I return to Texas. The next administration should know how important the Festival is to the literary life of our capital city and our country.

May is national Get Caught Reading month, and I've enjoyed being a part of it, and so has Jenna. Your Get Caught Reading campaign is a terrific way to remind people that reading inspires, educates, entertains and opens doors to worlds of adventure and opportunity.

One of the advantages of living in the United States is having some leisure time and unfettered access to the world's great thinkers, critics and geniuses. I've seen the difference that reading can make in all aspects of life in the U.S. and around the world. You'll find no greater evidence of the link between literacy and liberty than in the developing world -- in emerging democracies, and in struggling countries in Africa, Asia and the Middle East.

According to UNESCO, more than 774 million adults around the globe can't read. Two-thirds of that number are women. Seventy-five million children do not attend school. They're living in the poorest of conditions, in unstable regions, with little hope for the future. That's why we convened the White House Conference on Global Literacy with UNESCO, right here in New York, which highlighted the education initiatives from around the world. We invited spouses of world leaders, as well as education ministers, from every country.

At the summit, we heard initiatives from every part of the world. The only United States literacy initiative that was represented was Reach Out and Read, the pediatric initiative that I just told you about. And each one of these underscored the need for sustained leadership in promoting literacy, especially for girls and women.

I serve as the Honorary Chair of the U.S.-Afghan Women's Council, and I've enjoyed meeting Afghan women who've returned to school or who are attending school for the very first time in their lives since the fall of the Taliban. Some of the women I've met are the ones who risked their lives by teaching in underground secret schools. Others left their families and homes behind to pursue an education outside of their country, including here in the United States.

Today, they and many of their peers are learning to read and learning how to teach the next generation. They know that literacy is their gateway to freedom. Knowing how to read means that they can bring their ideas -- their own ideas -- and their questions to bear upon Afghanistan's new experiences.

I'm proud of our work to educate women and children throughout the continent of Africa, through the President's Africa Education Initiative. So far, AEI has awarded more than 300,000 scholarships in 40 countries. We've trained more than 600,000 teachers, and we've put more than 8 million textbooks and other learning materials in classrooms across the continent. And these are Africa-centric textbooks that are produced in each of the countries we've worked with, with a partnership with American universities.

West African singer and UNICEF Goodwill Ambassador Anjelique Kidjo is a perfect example of what can happen in families and communities where education has a chance to take hold. She overcame cultural barriers and fought tremendous ridicule to achieve an education. Today her organization, the Batonga Foundation, works alongside the Africa Education Initiative to make sure that other little girls don't have to fight so hard to have the right to go to school in Africa.

When Angelique launched Batonga, this is what she had to say: "Educating girls in Africa gives them the strength and the tools they need to be mothers of change. My mother was educated, and she fought for me to go to school, and my daughter is now in school. Once an African woman is educated, she fights to ensure that both her daughters and sons receive an education. From this is born a tradition that is passed on and grows from family to family, from generation to generation -- a tradition that's going to change the future for Africa."

We're also fortunate that we grew up here in the United States, where this tradition remains strong. Each time we unlock the mystery of literacy and open the doors of reading for a child, we give her the promise of a better future anywhere in the world. It's our job to make sure that our children -- and that citizens of all ages -- learn the skill of reading first, and the love of reading next.

Thank you to each one of you for raising awareness about the benefits and the necessity of literacy. We owe our future to people like you, who appreciate and facilitate the wonders of a good book, who call attention to the immense blessings of reading, and who tap the resources of great writers and pour them into books for the rest of us to read.