For Immediate Release
Office of the Press Secretary
March 3, 2008

THE PRESIDENT: General Wasden, thank you, sir; and General Lynch, thank you for having the Attorney General and me here to visit with the nation's Attorney Generals. I thank you very much for serving the country. I'm honored that you've stepped forward to say, I'm going to put my family in such a way that we're going to serve together. And I hope you have found the experience to be as enriching as I've found it -- my experience in public life to be. 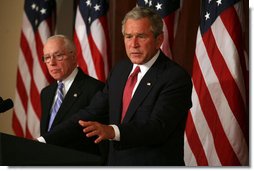 I also know that you're dealing with a wide variety of issues. I was the governor of Texas. I see the Attorney General of Texas here. It's been -- it was a great joy to work with Greg when I was the governor. We have a solemn responsibility together, and that's to protect the country. You do it in a variety of ways, and we've got a responsibility here. As a matter of fact, there's no greater responsibility at the federal government than to protect the American people, which means that we must make sure our professionals have the tools they need to do the jobs we've asked them to do.

Now there's a serious debate here, and some of the Attorney Generals have written a letter, both Democrats and Republicans, urging that the debate be solved in such a way that the professionals can do the job. And I thank you for wading in. There's a lot of legal complexities on the FISA renewal debate, but the real issue comes down to this: To defend the country, we need to be able to monitor communications of terrorists quickly and be able to do it effectively.

And we can't do it without the cooperation of private companies. Unfortunately, some of the private companies have been sued for billions of dollars because they are believed to have helped defend America after the attacks on 9/11. Now the question is, should these lawsuits be allowed to proceed, or should any company that may have helped save American lives be thanked for performing a patriotic service; should those who stepped forward to say we're going to help defend America have to go to the courthouse to defend themselves, or should the Congress and the President say thank you for doing your patriotic duty? I believe we ought to say thank you.

I'm really appreciative of the fact that 21 state Attorney Generals, seven Democrats and 14 Republicans, wrote a letter stating that assistance from private companies, as they put it, "is utterly essential, and urges the Senate," -- at the time -- "to approve FISA reform that protects the companies from lawsuits." I think that represents what most people -- how most people think here in the country.

The Senate heard you, and heard the voices of other people, and passed a really good FISA reform bill by a strong bipartisan majority, 68-29. The answer to the question about whether we ought to thank or sue is also clear to the majority in the House of Representatives. If this bill, the Senate bill, were allowed -- were given a vote on the floor of the House of Representatives, it would pass. There's enough votes available to pass a good Senate bill that would give our professionals the tools they need to protect the American people from further attack.

Unfortunately, a minority in the House has been holding the bill up. This weekend there was some encouraging news. The Chairman of the House Intelligence Committee, Silvestre Reyes, said that he was open to passing a bill with protections for our private sector partners, including those companies who are currently being sued for allegedly helping us after 9/11. I appreciate the Chairman's comments, and I urge the full House to pass this legislation as soon as possible.

I feel strongly about this issue, not only because I know we need to have the private carriers available to provide information, but to put it bluntly, if the enemy is calling in to somebody in the United States, we need to know who they're talking to and why they're calling and what they intend to do.

These lawsuits are really unfair, if you think about it. If any of the companies believed to have helped us -- I'm just going to tell you, they were told it was legal by the government. And they were told it was necessary by the government. And here they are getting sued. It would be dangerous -- the reason -- the danger in all this is that because the private companies are fearful of lawsuits or being besieged by lawsuits, they would be less willing to help in the future.

If your government has said this is legal, and we want your help, and then all of a sudden they get sued for billions of dollars, you can imagine how hesitant they'll be with future requests. And yet the threat is ongoing. And that's why we said failure by the House to act on the Senate bill would create an intelligence gap that is unacceptable.

So I appreciate your interest in the subject. Thank you for giving me and the General a chance to come by, and God bless you. Thank you. (Applause.)