For Immediate Release
Office of the Press Secretary
February 29, 2008

I appreciate the -- your helping to transform NATO so it deals with the pressures of the 21st century. You've done your job with great dignity and clarity of thought. And I'm looking forward to coming to Bucharest to support your efforts to make sure NATO is a relevant organization aimed at bringing security and peace to the world. 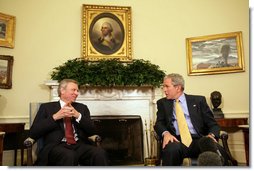 We've had a lot of things to discuss. A couple of key points: One, Afghanistan. The United States is committed to the NATO mission in Afghanistan. We're committed to a comprehensive strategy that helps folks in Afghanistan realize security, at the same time, economic prosperity and political progress. Secondly, our hope is that nations that have applied to join NATO continue to meet their MAP obligations. I'm looking forward to getting an assessment of the progress that these three nations have made from you, before we take the vote on enlargement.

I appreciate very much NATO's role in helping to provide some sense of stability in the Balkans. Thank you for doing a training mission in Iraq. Over all, thanks for being a force for good. And I'm proud to welcome you back here.

Four working weeks until the Bucharest summit of NATO. I can echo the President's words, first of all, NATO's operations and missions. We have a long-term commitment vis-a-vis Afghanistan. I thank the President for the United States' contribution in the NATO framework, which is an essential one. All 26 NATO allies are there and we are there for the long haul. We are there to support President Karzai and the Afghan people. But we're also there because we're fighting terrorism, and we cannot afford to lose. We will not lose; we are not losing; we are prevailing.

May I mention Kosovo, which will be discussed. The secondary important NATO presence, 60,000 strong, to protect all Kosovars, majority, minority, Albanian or Serb, so that also Kosovo will have a future.

NATO enlargement, the President mentioned. The nations concerned should go on with their reforms. No tickets are punched yet, but NATO enlargement will be on the agenda of the Bucharest summit. And certainly also what I call NATO finding the answers to modern threats and challenges, be it energy security and NATO's role as a bringer of added value. Cyber defense; we saw a huge cyber attack on Estonia not that long ago. Missile defense is certainly an issue.

So we have a real full calendar in Bucharest, and that is basically the calendar the President and I discussed. And I'm always very much enjoying the hospitality not only in the Oval, but at the Crawford ranch, as well.

I thank you very much.