For Immediate Release
Office of the Press Secretary
February 27, 2008

THE PRESIDENT: A while ago I announced that I would be naming a Presidential Envoy to the Organization of Islamic Conference, and I am pleased to announce it's Sada Cumber. He's a very successful businessman, a person who knows the Islamic world, and has agreed to serve in that capacity. Sada, I want to thank you very much.

We just had a discussion about his mission, and the core of his mission is to explain to the Islamic world that America is a friend -- is a friend of freedom, is a friend of peace, that we value religion -- that, matter of fact, we value it to the point where we believe that anybody should be able to worship the way they see fit, and we respect that. 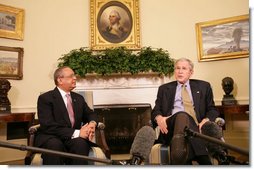 And his is an important job. There's a lot of misperceptions about America, and Sada is going to be a part of our effort to explain the truth. And when people hear the truth about America, when they know that we're a land full of compassionate people and that we value other people's opinions, that they'll slowly but surely begin to better appreciate.

Now, a lot of people love America, don't get me wrong. After all, there's a lot of people trying to come here because of what we stand for. But we've got work to do in certain areas. And I can't thank you enough for going, and really will strongly support you in your work.

THE PRESIDENT: Thank you very much, sir.

Q Any thoughts on Buckley?

THE PRESIDENT: I just had the -- I just hung up with Christopher Buckley, the son of William F. Buckley. I expressed Laura and my sadness over the passage of this very important figure in American political thought. He was a great author, a great wit and a leader. And Chris said that his dad died at his desk. And I asked whether it had been a -- I know it's a painful experience for Chris's heart, but he said that his dad died a peaceful death, and we got to thank God for that and thank God for his life.

THE PRESIDENT: No question, he was a -- one of the great political thinkers. He influenced a lot of people, including me. And he was -- I can remember those debates they had on TV, and he was so articulate and he captured the imagination of a lot of folks because he was -- he had a great way of defining the issues. It was erudite and yet a lot of folks from different walks of life could understand it. And he's a big figure in our history, and he'll be missed. And we ask for God's blessings on his soul. Thank you.