For Immediate Release
Office of the Press Secretary
February 26, 2008

THE PRESIDENT: Thank you all for coming, please be seated. Thank you. Welcome to the White House. Looks like we have a distinguished crowd here today. Most of you are renowned scholars, intellectuals, and writers. You've earned reputations for expressing man's noblest deeds and thoughts in pristine, eloquent English. Just like me. (Laughter.)

Justice, thanks for coming. Appreciate you being here. I thank members of the Cabinet who have joined us; Ambassador, glad you're here. 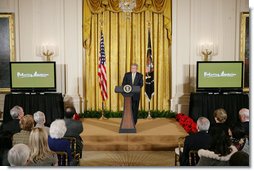 I want to say a word about Bruce Cole. Bruce is an accomplished art historian, a good man, and he's been a great Chairman of the National Endowment of the Humanities. (Applause.)

Bruce understands what all of you understand: At their best, the arts and humanities express the ideals that define our nation. The United States is a country defined not by bloodline, race, or creed, but by our character and convictions. We are united by an unyielding principle, and that is, all men are created equal. We firmly believe that each man and woman has the right to make the most of their God-given talents. And we believe that all are endowed with the divine gift of freedom.

These ideals have sustained us throughout the centuries, and as a new generation is called to defend the principles of our democracy, they must understand why these principles are worthy of effort and sacrifice.

The National Endowment for the Humanities is at the forefront of this vital educational mission. One way the Endowment fulfills this mission is through the "We the People" program -- which we established in 2002 to address gaps in our children's knowledge of history and civics.

In just five years, the program has awarded nearly 1,400 grants to projects that preserve historical sites, documents, and artifacts -- and train future historians. In partnership with the American Library Association, "We the People" has produced an annual "bookshelf" on enduring American themes such as "Courage" and "Freedom." More than 6,000 sets of these books have been provided to schools and public libraries across the country.

"We the People" teacher workshops have allowed thousands of educators to discover American history in the places where history was made: Ellis Island or the waters of Pearl Harbor. The Initiative's National Digital Newspaper Program is making millions of pages of historic American newspapers accessible online. Countless students and teachers and historians will benefit from these important first drafts of history.

In all these ways, "We the People" does an outstanding job of passing America's rich heritage on to future generations. Today I'm pleased to unveil a new project under this program -- the "Picturing America" Initiative. This Initiative will educate children about the great people and places and moments in our history using American art and masterpieces that depict them. 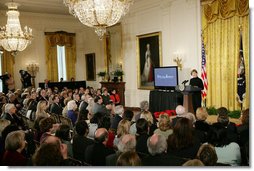 It's much better for us to hear about educational programs from someone who's probably more qualified than me -- (laughter) -- like a former teacher or a librarian. (Laughter.) And so it's my honor to welcome Laura, the First Lady. (Applause.)

MRS. BUSH: Thank you all, thanks so much. Thank you everyone. Thank you all. This is a very distinguished crowd I see as I look out. I have some -- a few acknowledgments, and I'm probably going to leave someone out because there are so many great people who have joined us here. Justice Scalia, thank you so much. Thank you all for being here with us. Chairman Cole, the Chairman of the National Endowment for the Humanities, who is -- had the whole idea of this "Picturing America." The members of Congress that have joined us here -- Secretary Kempthorne, Secretary Spellings; other members of the administration who have joined us.

Students, teachers, scholars, and distinguished guests, welcome to the White House for the official launch of "Picturing America." Welcome also to a special guest of the NEH, the Ambassador from Italy, Ambassador Castellaneta. Thank you so much for joining us as well.

I also want to thank all of the partners who are collaborating on this important project with the National Endowment for the Humanities: the Institute of Museum and Library Services -- and Anne Radice is here, who is the Chairman of the Institute; the Department of Health and Human Services, Office of Head Start; the National Park Service -- Mary Bomar, the Chairman of the National Park Service is here; and the American Library Association.

Today the East Room is filled with life and activity, as is often the case at the White House. But there are times, believe it or not, when the East Room is quiet, and George has the place to himself. George Washington, that is. (Laughter.)

This striking image of the Father or Our Country is a Gilbert Stuart portrait made in 1797. This painting is one of several versions that Gilbert Stuart painted. And the first version of this portrait was a gift for a member of the British Parliament who supported American independence. That version, called the Lansdowne portrait, is now part of the collection at the Smithsonian National Portrait Gallery.

This painting, the painting that's been here in the White House, was the famous one rescued by Dolley Madison during the war of 1812, just before the British troops set fire to the White House. Thanks to Dolley Madison, this portrait of George Washington has remained a permanent part of the White House collection, and an important part of American history, for nearly 200 years. 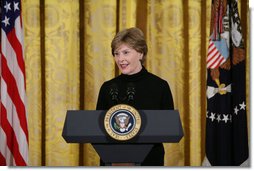 And now this portrait will take on another role in the life of our country -- as one of 40 iconic images in the "Picturing America" collection.

"Picturing America" is a National Endowment for the Humanities initiative, a part of "We the People," and an example of partners working across agencies and disciplines to bring the American experience to life in classrooms and libraries around our country.

The collection is made up of images that capture important moments in American life, and present them through painting, sculpture, photography, architecture, and decorative arts.

The collection is accompanied by an in-depth teaching guide, which shows educators and librarians how to use these works within the context of their core subjects, including history, literature, math, and science.

The goal is to share the American experience with a wide audience -- children and adults from our largest cities to our most rural communities.

Already more than 1,500 schools and libraries in all 50 states have received the materials as part of a 2007 pilot project. Educators have long known the value of dynamic, interactive learning environments, and they love these bright, high-quality teaching tools.

Rose Cory, a teacher in Schaumberg, Illinois, said, "We're overwhelmed with how the size of the pictures conveys so much more information than one can get from a reproduction in a book."

Some of the selections are on display in the Grand Foyer, and we'll also see examples in the video and in Chairman Cole's presentation. The vivid reproductions bring words and ideas to life. Everyone will love examining these scenes, which stretch from the early Republic to modern America.

Now it's my pleasure to introduce our next speaker: Dr. Bruce Cole, the Chairman of the National Endowment for the Humanities, and our great friend. Thank you very much, Dr. Cole. Come on up. (Applause.)

And I want to thank all the partners as well that have worked with the National Endowment for the Humanities, for making "Picturing America" possible for so many schools and community libraries around our country.

Now I'd like to invite you to a reception in the East Room -- West Room -- (laughter) -- Dining Room. (Laughter and applause.)