For Immediate Release
Office of the Press Secretary
February 26, 2008

THE PRESIDENT: I just had a fascinating meeting with folks who have served our country nobly in the past. I thank them for coming. I've got Democrats here, Republicans are here, concerned citizens. And our discussion was the trade bill with Colombia. 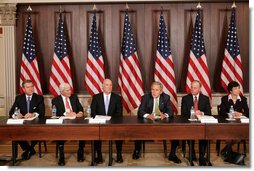 A defeat of the trade bill with Colombia would send a contradictory message. It would embolden the false populism that exists on the continent. It would send a chilling signal to our allies, and it would harm national security of the United States.

We also talked about the economic benefits. Many of the Colombian goods come into our country duty-free, it seems like we ought to be treated the same way by sending our products into their countries. And this will particularly benefit small businesses and farmers and ranchers.

And I want to thank you for your suggestions on how to advance this trade bill; how we can work with both Republicans and Democrats to get this trade bill out of the Senate. It's in the nation's interests. A lot of time people think about trade, it's just an economic issue. In this case, it is a national security issue, and one that the members of both parties must take seriously. And I repeat that if the trade bill with Colombia is defeated, it will harm the national security interests of the country.

And I thank you all for coming. I appreciate your time. Thank you for your advice.