For Immediate Release
Office of the Vice President
February 26, 2008

THE VICE PRESIDENT: Thank you very much. General Campbell, General Odierno, members of Three Corps, families, and fellow citizens: It's a privilege to stand with members of an historic Army unit, who have just returned from an historic mission.

Since you recently endured a very long plane ride, the last thing I want to do is give a long speech. But it's good to see you on home turf, and I'm filled with admiration and respect for the headquarters staff of Three Corps. I wanted to be here as the colors are uncased, the battle streamers are attached, and another proud chapter in Three Corps history is concluded. And to each one of you I bring good wishes and congratulations from the commander in chief, President George W. Bush. 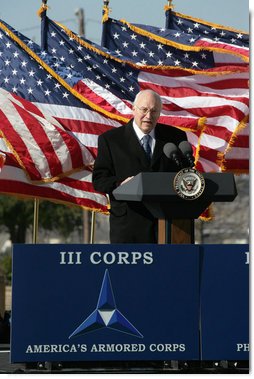 I also want to thank all your loved ones, who have been the quiet partners in every success you've achieved. I know their devotion and support has been a daily encouragement to each one of you during a long deployment. Every soldier's family is sacrificing for this country, and they've earned the respect of the entire nation.

Nearly 15 months ago, General Odierno and his team deployed to a critical place at a critical moment. After liberation from dictatorship and a series of national elections, political progress in Iraq had slowed dramatically. Attacks against our troops were on the rise. Ethno-sectarian violence was escalating. The security situation in Baghdad was at a low point, and Iraq faced a great risk of descending into chaos.

The moment called for a decisive change in strategy -- to seize the initiative against the forces of violence, provide basic security in the capital city, and give Iraqis the room to achieve reconciliation and the confidence to move forward with their lives. Like other generals in other times, Ray Odierno was given a difficult objective and asked to draw up a plan. He did so. And with the able support of the Three Corps staff, plus the incredible courage of American troops in the field of battle, that plan has turned events toward victory.

The troop surge made it possible to go out into the population with a 24/7 presence -- clearing dangerous areas, and staying so the enemy couldn't take them back. And the results are there for all to see: more effective raids to root out enemies; better and more accurate intelligence information from the local population; and higher hopes for the future among the Iraqi people. With security in Baghdad, Iraq's elected leaders have been able to reignite the process of reconciliation, and greater numbers of Iraqis have rejected al Qaida. The reason for this is clear: in the neighborhoods of Baghdad and in other parts of the country, the more that Iraqis have gotten to know the Americans -- the nature of our intentions, and the character of our soldiers -- the better they've felt about our country.

They know that America can be trusted. They know we're a nation that accepts hard jobs, and keeps doing the work even though others may tire of the effort. Five years ago, we took down the Iraqi dictator. And, in the finest tradition of our country, we've kept our pledge to help the Iraqi people reclaim their own destiny. They now have a chance to secure their country's future. Hundreds of thousands of them have volunteered to join security forces -- despite all the threats, and the murders, and the car bombs at recruiting stations. And in the struggle against terror, no country has more battlefield deaths, or lost more civilians, than Iraq itself. They and their elected leaders are striving to preserve democracy against direct attack by merciless enemies. And they can know that the United States, as in other times and other places, stands firmly for the cause of democracy. (Applause.) 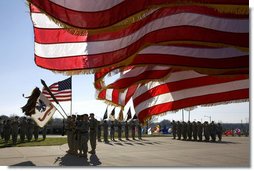 Our goal remains an Iraq that upholds the rule of law, respects the rights of its people, provides them with security, and is an ally in the war on terror. That war is not yet won -- but the day will come when terrorists and terror states no longer pose a strategic threat to the United States. And you, ladies and gentlemen of Three Corps -- and all who have served the cause of freedom in this battle -- can be proud of your service for the rest of your lives.

For all the difficulties that lie ahead, each one of you is entitled to feel tremendous satisfaction at what's been achieved in the last 15 months. The rates of casualties among our forces and Iraqi civilian deaths have declined dramatically. And all this is the result of intense, sustained effort on the part of Americans and our Iraqi allies. When you went into the theater of battle you knew what you were doing, you cared about the mission, and you turned things around. In the process you've added luster to the name and the reputation of Three Corps. You've built a record that will be studied and emulated in the years ahead. And the general who served as your leader is now on his way to the Pentagon, with the title of Army vice chief of staff -- and a fourth star on his shoulder. (Applause.)

Ray Odierno is a West Point man, the son of a World War Two veteran, the father of an Iraq war hero. When this deployment began, General Odierno declared simply, "We will succeed." He, and you, delivered on that promise. So, General, let me say again that it's a privilege to be with you and the entire command staff of Three Corps. On behalf of the President of the United States, I'm proud to say congratulations, job well done, welcome home. (Applause.)