For Immediate Release
Office of the Press Secretary
February 21, 2008

PRESIDENT BUSH: Madam President, you're right, we have met four times, and every time I'm the better for it. (Laughter.) I appreciate the warm welcome we've received from the people of your beautiful country.

We bring with us the greetings and best wishes of the American people. I'm proud to be traveling today not only with a strong delegation, headed by my wife, but also the Secretary of State, Condoleezza Rice. (Applause.) I'm so honored to be with your troops. I'm looking forward to the display of talent and professionalism we're about to see. I thank those who have worked hard to help them become professional soldiers, all in the cause of bringing peace and security to the people of Liberia. 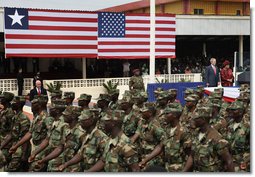 Though we're over 4,500 miles from the United States, I feel pretty much at home here. (Applause.) In Liberia, you fly the "Lone Star" flag. (Laughter.) Of course, I was the former governor of Texas. (Laughter.) We call ourselves the "Lone Star State." (Laughter.) Your capital is named for an American President, and of course, I am an American President. (Laughter and applause.) The name of your country, Liberia, means, "land of the free," and there is no place I feel more welcome than a land where liberty is love and the hope of freedom reigns. (Applause.)

This country was founded by former American slaves who came here seeking the freedom they had been denied in my country. Through hard work and determination, they established the first independent republic on the continent of Africa. The free country they built became a source of pride for her people, and a strong ally in the cause of freedom. As the President said, Franklin Roosevelt came here in 1943 to confer with your great President, Edwin Barclay. Together, our two nations helped defeat the forces of fascism. Together, our two nations helped save millions from lives of tyranny and despair.

In the intervening years, Liberia saw days of challenge and sorrow. They suffered the descent into dictatorship and chaos. Civil wars took the lives of hundreds of thousands of your citizens. Yet even in their darkest moments, the Liberian people never gave up on the hope that this great nation would once again be the land of the free that its founders intended.

In 2005, you reclaimed your liberty. You went to the polls and chose the first woman ever elected to lead an African nation. (Applause.) President Ellen Johnson Sirleaf has been a strong leader for the Liberian people. She has been a strong partner of the United States of America. I'm proud to call her friend, and I'm proud of the work we are doing together to help the people of this nation build a better life.

Together we're fighting the scourge of disease. It is irresponsible for comfortable nations to stand by knowing that young babies are dying from mosquito bites. It is unnecessary, and the United States will continue to lead the cause to eradicate malaria from the continent of Africa. (Applause.) We're working to lift the burden of debt, so that Liberia can achieve her potential, and unleash the entrepreneurial spirit of her citizens. We're working to help the children of Liberia get a good education, so they'll have the skills they need to turn their freedom into a future of prosperity and peace.

And today, Madam President, I'm proud to announce that the United States will provide one million textbooks over the next year -- (applause) -- as well as desks and seating for at least 10,000 Liberian school children by the start of the new school year. (Applause.)

Together with the help of the United Nations Mission in Liberia, we're working to heal the wounds of war, and strengthen democracy, and build a new armed forces that will be a source of security for the Liberian people instead of a source of terror.

In all these areas we're making good progress. You know, one of the things I've learned, and I suspect the people of Liberia have learned: It's easier to tear a country down than it is to rebuild a country. And the people of this good country must understand the United States will stand with you as you rebuild your country. (Applause.)

And you are making progress, and it's possible because of the iron will of the lady you lovingly refer to as "Ma." That would be you, Madam President. (Applause.) I appreciate the fact that you've ushered in an age of reform, and you've opened up a new chapter in the relationship between our country. And as you mentioned, it was my high honor to welcome you to the White House last year and present you with America's highest civil honor, the Presidential Medal of Freedom.

I'm pleased to visit your land. I thank you for the invitation. I thank the Liberian people for courage and steadfastness and enduring faith in the power of freedom. With your continued determination, there is no doubt in my mind that Liberia will become a beacon of liberty for Africa and the world, and you will forever uphold the "Lone Star."