For Immediate Release
Office of the Press Secretary
February 20, 2008 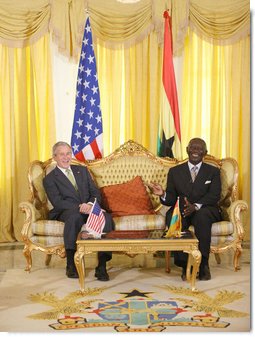 You're right, you and I are both finishing our term -- but you forgot to say that we're both going to finish strong. (Laughter and applause.)

PRESIDENT KUFUOR: That is a politician I talk about. (Laughter.)

PRESIDENT BUSH: You mentioned the Millennium Challenge Account. And I believe you're the first country on the continent of Africa to receive a grant. And we did so because we believe in supporting governments that fight corruption, invest in their children, invest in the health of their citizens, believe in marketplace economies -- and that's exactly the way you've led your country.

And so ours is a -- it's certainly not a gift. It is given in a cooperative spirit that (inaudible) people. And we believe that it is in our national interest to promote freedom and democracy, as well as help the citizenry make the (inaudible). And you've led the way, Mr. President; it's been very easy to support your government.

And I appreciate you bringing up disease. There's no doubt in my mind that given some help, the government of Ghana -- led by you, sir -- will eradicate malaria. It's going to take a lot of work and a lot of organizations to do this, and support from the international community -- which you will have -- and I predict to the people of Ghana that when you look back at President Kufour's leadership, you'll say this was the beginning of the end of the disease (inaudible).

So I appreciate your leadership, my friend, and I want to thank you very much for this warm hospitality. I do want to thank the people of Ghana -- at least those we've seen so far -- for getting up early, lining the streets and waving with such enthusiasm. It made us all feel great, and it's a part of the trip I've really been looking forward to. So grateful for your hospitality. Thank you, sir. (Applause.) 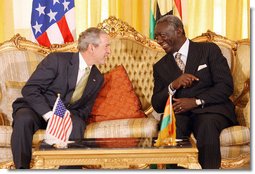