For Immediate Release
Office of the Press Secretary
February 19, 2008

PRESIDENT BUSH: Well, thank you very much. Thank you; please be seated -- unless, of course, you don't have a chair. (Laughter.) Mr. President, thank you for joining us. Madam Kagame, we're so thrilled you're here. Laura and I are honored to be with you. I appreciate the members of the Diplomatic Corps joining us, as well. 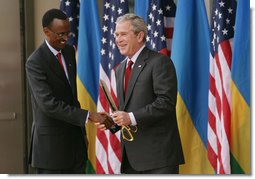 I had a speech -- I'm not going to give it -- (laughter) -- because guys like me always like to cut ribbons. There's nothing more special than cutting the ribbon on a new embassy, particularly in a country like Rwanda. (Applause.)

Rwanda has come -- it's amazing. You know, Laura and I just came from the -- well, we came from a beautiful lunch with the President and the First Lady. But we went to the holocaust museum. It's hard to believe that a country could recover so quickly from such a horrible moment. It's hard to believe that there could be hope after a devastating period of time like that, and yet there is. And so cutting the ribbon here really is a chance for America to say, we stand with you as you hope for a better future. (Applause.)

And I think when people get to know Americans, thanks to people who work here at this embassy, they will find that we're a nation of courageous and compassionate people, too.

And so my first call is to thank our fellow citizens for working in Rwanda. And thanks for serving the United States of America. I hope you have as much pride as I do in saying, "I represent America." (Applause.) And the reason I do so is because we are a compassionate people. And when we see suffering, we just don't sit around and talk about it, we act upon it. And when we see the hungry, we feed the hungry -- not because of its -- you know, it's, like, we want to establish undue influence; it's because we all believe we're children of God. (Applause.)

And so for those of you on the front lines of saving lives with the Malaria Initiative, I say, thanks, good job, keep doing it. It's not that hard to spread out nets. It requires a government willing to cooperate with you. It's just not that difficult to figure out how to deal with the disease of which thousands of babies die. It's insecticides and nets and good strategies. So thanks for working on that.

For those of you who are dealing with HIV/AIDS, you know, people often ask why did I decide to get involved? I couldn't stand by and watch a generation of people eradicated with something that we could help, see. And so I want to thank my fellow citizens for saving lives. And gosh, I hope it makes you feel good; it certainly makes me feel good to know you're out there working hard. And so thanks for being a part of what I call a "mission of mercy." And thanks for showing the good heart of America.

For the Rwandan citizens here, thanks for helping our embassy go. We can't run our embassies without the people from the host nations, and the Ambassador tells me that you're really fine people, and I know my fellow citizens thank you for working side by side with the people of the United States of America.

For those of you wearing the uniform, God bless you. There's nothing better than being the Commander-in-Chief of such an outstanding group of men and women, who selflessly serve a cause greater than themselves.

I do want to thank Michael and Lesley for their service. I do want to recognize our great Secretary of State. I thought, for a minute, you were going to name that road after Secretary Condoleezza Rice. (Laughter.) When they're talking about great Americans, and they're going on and on and on, I was certain it was going to say, "Rice Boulevard." (Laughter and applause.)

I do want to thank Cheryl Sim and her husband, Richard. He's from Texas. Any other Texans that are here? Yes, there you go. You know what it's like. (Laughter.) Pretty lucky deal to be called Texan, isn't it?

Finally, I do want to end by saying this: To who much is given, much is required. Presidents must make decisions based upon certain principles that are timeless and universal. And that's one of the principles that stands in -- it stands our nation in good stead. We're a blessed nation, and I believe it is in our interests, our national interests and our moral interest, to help people like we're helping them here in Rwanda.

PRESIDENT KAGAME: President Bush, Madam Laura Bush, Secretary of State Condoleezza Rice, Ambassador Mike Arietti, distinguished ladies and gentlemen, I'm delighted to be a part of the inaugural ceremony for this magnificent facility that is to house the Embassy of the United States of America in Rwanda.

The commissioning of this new home for America's diplomats is important not only for the government and people of the United States; it is also vital for us Rwandans. As you all know, an embassy is a home away from home. This beautiful complex should become a magnet for drawing more Americans to Rwanda, not only civil servants and the diplomats, but American businessmen and women seeking investment opportunities in our country and the region. They'll find reliable and able partners in Rwanda's business community and in government through private-public partnerships.

The new embassy is also a vote of confidence in how we are building a new nation. We are proud of that. (Applause.) Further, it is a place of learning for one seeking information and new ideas in its famous library, with its vast and original sources.

Mr. President, America inspires Rwanda, and I think Africa, in many ways. Like our continent, the United States began as a colony, fought a war of independence, descended into civil war, before emerging as the world's most enterprising nation. (Applause.) With America's inspiration and partnership, our country and our continent will also make the transition into the prosperity column.

Mr. President, I once again thank you for inviting me to this function -- and Ambassador Arietti. And in conclusion, I wish to concur with Ambassador Arietti that the roundabout outside this embassy should carry the name of the great American civil rights leader, Martin Luther King. (Applause.) And we'll help with -- bring that about as soon as possible.

So once again, I thank you visiting our country and for inviting us to be part of this memorable occasion. I thank you very much. (Applause.)