For Immediate Release
Office of the First Lady
February 19, 2008

MRS. BUSH: Well, let me just take a chance, since it's come around to me, to tell you -- thank you so much, Mrs. Kagame, for getting this group together and for inviting me to be a part of it. Mrs. Kagame and I have worked together on a few other issues when she was the President -- I guess it was called President of the African First Ladies Against AIDS -- and joined their meeting in New York several years ago when she did that. And then I've had one other chance to be here in Rwanda, and we did a few things together. And that's when I visited FAWE Girls' School. 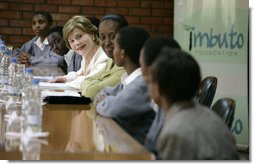 I'd like to introduce some people who are here with me -- the backbenchers, as they call them: my Chief of Staff Anita McBride is here, who was with me the last time I was in Rwanda; and my Press Secretary Sally McDonough. I wanted to introduce them. And then I just thought I would introduce someone that you all might be interested in meeting who just showed up on the back bench -- Bob Geldof right here. Bob has been very active worldwide working to reduce HIV/AIDS rates and poverty and a lot of other things, especially in Africa. So thanks, Bob, for coming with us.

Well, I just want to talk about how important I think it is for girls to be educated. If you're educated your advantages are so much bigger, even if you just use your talents and your education to raise a family. And I want to encourage you all to get the best education you can possibly get, and when you do have a family to make sure your children are educated, because I think that's -- education worldwide, I think, is really very, very important.

And I'm a teacher; that's what I did. I was a teacher and a librarian. And so my whole life, education -- since I was little and played school with my dolls, education has been very, very important to me. And I'm so thrilled to meet all of you. I'm excited to hear what your stories are and what your education means to you. And I'm especially happy that the United States, the people of the United States are involved also with the ones of you who have a scholarship from AEI.