For Immediate Release
Office of the Press Secretary
February 18, 2008

THE PRESIDENT: Habari zenu. We have just toured the hospital here, which is on the forefront of Tanzania's fight against malaria. I want thank you, Doc, for leading the tour, and for your compassion. I appreciate the Commissioner welcoming us to the district. I also want to thank Minister Mwakyusa for joining us here in Arusha. I'm grateful to members of the Diplomatic Corps who have joined us. 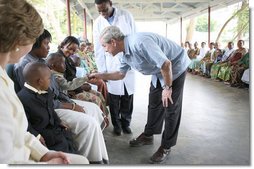 During the visit at this hospital we met pregnant women who will receive insecticide-treated bed nets. We witnessed a pediatric ward and observed children being diagnosed and treated. We saw how an historic partnership is saving lives across the continent of Africa.

In 2005, I announced that the United States would work to save lives through our Malaria Initiative. Under this five-year, $1.2 billion program, we're working with 15 African countries to cut malaria-related deaths by half.

Our strategy to achieve this goal is straightforward. First, the initiative supports indoor residual spraying to keep deadly mosquitoes at bay. Here in Tanzania spraying campaigns have reached hundreds of thousands of homes, and have protected more than a million people.

Second, the initiative supports treatment for those who are most vulnerable to malaria, especially pregnant women. Here in Tanzania, more than 2,400 health workers have been trained to provide specialized treatment that prevents malaria in expectant mothers.

Third, the initiative provides life-saving drugs. Here in Tanzania, the program has supported more than a million courses of treatment, and has trained more than 5,000 health workers to use them.

Fourth, the initiative supports the distribution of insecticide-treated bed nets, and Laura and I are about to distribute some of those bed nets. This is one of the simplest technologies imaginable, but it's also one of the most effective. Here in Tanzania, we're working with the government and partners such as the Global Fund to provide bed net vouchers for infants and pregnant mothers. Women can use these vouchers to buy bed nets at local shops at a huge discount. So far, an estimated 5 million vouchers have been distributed through these programs.

Today, I'm pleased to announce new steps in the bed net campaign. Within the next six months, the United States and Tanzania, in partnership with the World Bank and the Global Fund, will begin distributing 5.2 million free bed nets. This ambitious nationwide program will provide enough nets to protect every child between the ages of one and five in Tanzania. 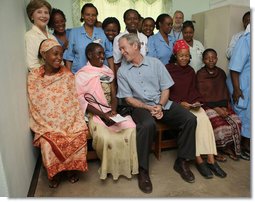 The bed net campaign is supported by Tanzanian manufacturers, including A to Z Textiles, which we will visit later today. So as this campaign protects women and children from malaria, it also boasts -- boosts local economies. It helps develop a culture of bed net use that will be sustained long after relief programs have ended.

Over the past two years we've applied our strategy here in Tanzania, and we're seeing results. In June 2006, at the District Hospital in Muleba, more than 50 people died because of malaria. In June 2007, after a spraying campaign supported by our Malaria Initiative, the number of deaths had dropped to five. In Zanzibar the percentage of infants infected with malaria has dropped from about 20 percent to less than 1 percent.

The campaign to fight malaria has the support of government and private citizens alike. United States schoolchildren have raised money to send bed nets to Africa. Houses of worship have sent their prayers, and their faithful, compassionate men and women who travel here to confront the suffering and heal the sick.

Tanzanian citizens are stepping forward. In one area, residents launched a campaign called Kataa Malaria -- for those who don't speak Swahili, it means "reject malaria." (Laughter.) As part of the campaign, workers went door-to-door to teach people how to use bed nets. They launched TV and radio ads. They spoke in mosques about malaria prevention and treatment.

And so on behalf of the United States of America we say, God bless you. (Applause.) And to the Tanzanian government we say, thank you for your efficient and hard work. (Applause.) And so it's been an honor to be with you. Asante. (Applause.)