For Immediate Release
Office of the Press Secretary
February 17, 2008

Remarks by President Bush and President Kikwete of Tanzania in An Exchange of Toasts
State House
Dar es Salaam, Tanzania

PRESIDENT KIKWETE: Distinguished invited guests, ladies and gentlemen. It's not time for speeches, because I think we spoke enough the whole day, in the morning, later in the afternoon. It's time for dinner, it's time for us to enjoy after this long and hard, arduous day.

All that I wanted to say is, once again, thank you very much for honoring us with this great visit. It's a great honor for us. You have made us proud. It's a visit that has reaffirmed the longstanding bonds of friendship and cooperation between the United States of America and the United Republic of Tanzania. So your coming here certainly cements these friendly relations. 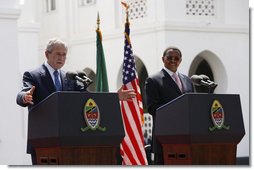 PRESIDENT BUSH: I'll be -- (laughter.) But I must say that our trip here has exceeded my expectations. I knew you were an accomplished government. After all, you've dramatically reduced malaria. You're in the process of dramatically reducing HIV/AIDS. My country has awarded you the largest Millennium Challenge Grant ever in the history of our nation, all because your government is committed to honest, decent government for the people.

I have been extremely touched, as has Laura, by the outpouring of support by the great people of Tanzania. And so, Mr. President, I too would like to propose a toast: To you and your family, to the people of Tanzania, and to our friendship, may it be long lasting.