For Immediate Release
Office of the First Lady
February 17, 2008

Mrs. Bush's Remarks at the Launch of the National Plan of Action for Orphans and Vulnerable Children
WAMA Foundation
Dar es Salaam, Tanzania

MRS. BUSH: Thank you very much. Congratulations on this National Plan. (Applause.) I also want to thank the singers and the dancers from the Salvation Army for your great performance. Habari zako. (Applause.)

Thank you for the warm welcome to your beautiful country. I'm honored to be here with Tanzania's First Lady, Mama Kikwete. (Applause.)

I also want to recognize Silvia, the 15-year-old orphan. Thank you so much, Silvia, for telling us your story. (Applause.) Joining us also is Susan Green, the wife of the United States Ambassador to Tanzania. (Applause.) Ambassador Mark Dybul, who is the U.S. Global AIDS Coordinator; Ambassador Dybul. (Applause.) And Dr. Aisha Kigoda, thank you very, very much. I appreciate it so much. (Applause.) 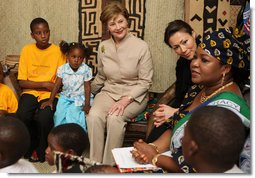 Mama Kikwete, President Kikwete and the people across Tanzania are helping young people by fighting HIV/AIDS. President and Mrs. Kikwete have set a great example for this country. They've welcomed an orphan into their own family, and when they launched Tanzania's national testing and counseling campaign last summer, they volunteered to take the first test themselves. (Applause.)

The American people are proud to stand with the people of Tanzania as you confront HIV/AIDS. (Applause.) In 2003, my country launched the President's Emergency Plan for AIDS Relief. Working in partnership with your government, we've supported antiretroviral treatment for approximately 100,000 people. This partnership is also providing care for more than 200,000 of Tanzania's orphans and vulnerable children. (Applause.)

Tanzania is one of the first countries to develop a National Plan of Action for Orphans and Vulnerable Children. With support from the United States, this plan has been pilot-tested in parts of Tanzania, and is showing great signs of success. Today, I'm happy to be here as you announce that Tanzania will launch the full action plan to protect orphans and vulnerable children nationwide. And I'm proud that the United States, through PEPFAR, will sustain its commitment to this program. (Applause.)

One of the best ways to support orphans and vulnerable children is to eliminate the stigma of HIV. Often children who have lost parents to AIDS are shunned by their family members or neighbors who don't know how the disease is transmitted. These children suffer discrimination, abuse and exploitation. So Tanzania's National Action Plan will work with schools to add a message of tolerance to their curriculum. All of us have the obligation to treat all children with dignity and respect.

On a trip to Africa last year, I was moved by something I saw in a school yard. It was a sign that read: "A friend with AIDS is still a friend. Stop stigmatation." (Applause.) This message is an important one, and that all of us, adults and children, should embrace. 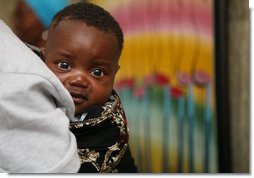 Through this partnership between Tanzania and the United States, we can restore lives and hope to orphans and their families. Congratulations on the next phase of this program. Thanks to each of you for your commitment to Tanzania's children. I wish you the very best for the National Plan for Action, and for your country's work to overcome HIV/AIDS. (Applause.)