For Immediate Release
Office of the Press Secretary
February 14, 2008

Fact Sheet: Congress Must Act Now To Ensure That We Have The Tools To Keep America Safe

THE PRESIDENT: Good afternoon. This Saturday at midnight, legislation authorizing intelligence professionals to quickly and effectively monitor terrorist communications will expire. If Congress does not act by that time, our ability to find out who the terrorists are talking to, what they are saying, and what they are planning will be compromised. It would be a mistake if the Congress were to allow this to happen. 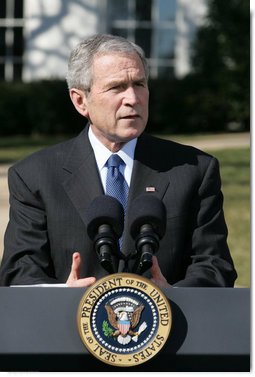 Members of Congress knew all along that this deadline was approaching. They said it themselves. They've had more than six months to discuss and deliberate. And now they must act, and pass legislation that will ensure our intelligence professionals have the tools they need to keep us safe.

Earlier this week the Senate did act, and passed a strong bill, and did so with a bipartisan majority. The Senate bill will ensure that we can effectively monitor those seeking to harm our people. The Senate bill will provide fair and just liability protection for companies that assisted in the efforts to protect America after the attacks of September the 11th. Without this protection, without this liability shield, we may not be able to secure the private sector's cooperation with our intelligence efforts. And that, of course, would put the American people at risk.

Our government has no greater responsibility than getting this work done, and there really is no excuse for letting this critical legislation expire. I urge congressional leaders to let the will of the House and the American people prevail, and vote on the Senate bill before adjourning for their recess. Failure to act would harm our ability to monitor new terrorist activities, and could reopen dangerous gaps in our intelligence. Failure to act would also make the private sector less willing to help us protect the country, and this is unacceptable. The House should not leave Washington without passing the Senate bill.

I am scheduled to leave tomorrow for a long-planned trip to five African nations. Moments ago, my staff informed the House leadership that I'm prepared to delay my departure, and stay in Washington with them, if it will help them complete their work on this critical bill.

The lives of countless Americans depend on our ability to monitor terrorist communications. Our intelligence professionals are working day and night to keep us safe, and they're waiting to see whether Congress will give them the tools they need to succeed or tie their hands by failing to act. The American people are watching this debate, as well. They expect Congress to meet its responsibilities before they leave town on a recess. 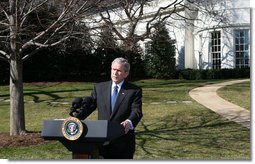 I'll answer a few questions. Ben, if you've got a question, I'll be prepared to answer.

Q Thank you, Mr. President. It appears with that deadline approaching, that the House and the White House might be seen as being engaged in a game of chicken here, playing politics with an important intelligence law. If the law expires, and something happens, wouldn't you be at least partly to blame? And on your Africa trip, if you have to delay, do you think that you would be shortening your trip at all?

THE PRESIDENT: As to the latter, the delay depends on whether the House acts, of course, and they got plenty of time to get this done. But if we have to delay, we'll delay. But I'm going to go to the countries that I said I'd go to.

And to the first case, whether or not this is politics, I certainly hope not. I can assure you al Qaeda in their planning isn't thinking about politics. They're thinking about hurting the American people again.

Who's to blame? Look, these folks in Congress passed a good bill last -- late last summer. In other words, they analyzed the situation, they said there's a threat, and they agreed to give our professionals the tools they needed to do the job. The problem is they let the bill expire.

My attitude is, if the bill was good enough then, why not pass the bill again? I mean, the threat hasn't gone away. Secondly, they've had plenty of time to think about how to address the issue. Thirdly, the Senate led the way; the Senate showed how to pass a good bill, with a bipartisan majority. And the truth of the matter is, if there was a willingness to get this problem solved, all the leadership would have to do is submit the Senate bill for a vote.

So we'll see what happens. My attitude is, now is the time to get the job done. There's been plenty of time to think about it, plenty of time to debate it, and there's a good way forward. And hopefully the House leadership will put this bill for a vote and let the members vote as they so desire.

Q Mr. President, I realize this is a sensitive matter, but I'm wondering if there's a way you can spell out for the American public what the practical impact may be, if this law expires, on our intelligence professionals, say, next week.

THE PRESIDENT: Well, I hope it doesn't. But clearly, there will be a gap. And of course, we won't be able to assess that gap until the time. Step one is, I guess you got to come to the conclusion that there's a threat to America, or not a threat. And evidently some people just don't feel that sense of urgency. I do. And the reason I do is I firmly believe that there's still people out there who would do us harm.

Thirdly, people are wondering why companies need liability protection. Well, if you cooperate with the government and then get sued for billions of dollars because of the cooperation, you're less likely to cooperate. And obviously we're going to need people working with us to find out what the enemy is saying and thinking and plotting and planning.

And so it's a -- to me it's a -- I guess one way to look at it is, some may not feel that same sense of urgency I do. I heard somebody say, well, this is just pure politics. No, this is what is necessary to protect the American people from harm. And I recognize there hasn't been an attack on our country, but that does not mean that there's not still an enemy that lurks, plans and plots.

Again, I'll repeat to you that the Congress took a look at this issue and decided that the tools were necessary to give to our professionals last -- late last summer. And if it was necessary late last summer, why is it not necessary today? What has changed? Well, the threat hasn't gone away. It's still there, it's still real, and we better be worried about it as a nation. And the House has now got time to go out and get the deal done.

Yesterday -- a couple of days -- votes ago in the Senate made it abundantly clear that Republicans and Democrats can come together and put a good piece of legislation together and get it passed. And the House leadership has an opportunity to do that now.