For Immediate Release
Office of the Press Secretary
February 13, 2008

THE PRESIDENT: Director, thank you for joining me. Good morning. At this moment, somewhere in the world, terrorists are planning new attacks on our country. Their goal is to bring destruction to our shores that will make September the 11th pale by comparison. To carry out their plans, they must communicate with each other, they must recruit operatives, and they must share information. 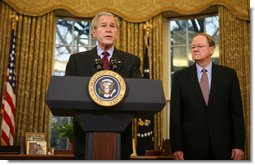 The lives of countless Americans depend on our ability to monitor these communications. Our intelligence professionals must be able to find out who the terrorists are talking to, what they are saying, and what they're planning.

To help our intelligence agencies do this, Congress passed the Protect America Act last year. Unfortunately, Congress set the law to expire on February 1st -- and then failed to pass new legislation that would keep these tools in effect over the long run. And so at the 11th hour, Congress passed a temporary 15-day extension of the current law which will expire at midnight this Saturday. I signed that extension. I did so to give members of the House and Senate more time to work out their differences.

Well, the Senate has used this time wisely. I am pleased that last night, Senators approved new legislation that will ensure our intelligence professionals have the tools they need to make us safer -- and they did so by a wide, bipartisan majority. The Senate bill also provides fair and just liability protections for companies that did the right thing and assisted in defending America after the attacks of September the 11th.

In order to be able to discover enemy -- the enemy's plans, we need the cooperation of telecommunication companies. If these companies are subjected to lawsuits that could cost them billions of dollars, they won't participate; they won't help us; they won't help protect America. Liability protection is critical to securing the private sector's cooperation with our intelligence efforts. The Senate has passed a good bill, and has shown that protecting our nation is not a partisan issue. And I congratulate the senators.

Unfortunately, the House has failed to pass a good bill. And now House leaders say they want still more time to reach agreement with the Senate on a final bill. They make this claim even though it is clear that the Senate bill, the bill passed last night, has significant bipartisan support in the House.

Congress has had over six months to discuss and deliberate. The time for debate is over. I will not accept any temporary extension. House members have had plenty of time to pass a good bill. They have already been given a two-week extension beyond the deadline they set for themselves. If Republicans and Democrats in the Senate can come together on a good piece of legislation, there is no reason why Republicans and Democrats in the House cannot pass the Senate bill immediately.

The House's failure to pass the bipartisan Senate bill would jeopardize the security of our citizens. As Director McConnell has told me, without this law, our ability to prevent new attacks will be weakened. And it will become harder for us to uncover terrorist plots. We must not allow this to happen. It is time for Congress to ensure the flow of vital intelligence is not disrupted. It is time for Congress to pass a law that provides a long-term foundation to protect our country. And they must do so immediately.