For Immediate Release
Office of the Press Secretary
February 13, 2008

THE PRESIDENT: Thanks for coming. Thanks for the warm welcome. I'm pleased to be joined by leaders of both parties to enact an economic growth package for the American people.

You know, a lot of folks in America probably were saying that it's impossible for those of us in Washington to find common ground, to reach compromise on important issues. I didn't feel that way; I know the leaders didn't feel that way. And as a result, we have come together on a single mission -- and that is to put the people's interests first. And I really do welcome the members of Congress and I thank you for your hard work. 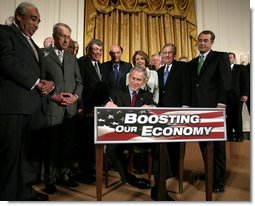 You know, I know a lot of Americans are concerned about our economic future. Our overall economy has grown for six straight years -- but that growth has clearly slowed. And so in January had an important phone call with the leaders of the Congress to talk about whether or not we could come together to provide a booster shot for our economy -- a package that is robust, temporary, and puts money back into the hands of American workers and businesses.

Congress passed a really good piece of legislation, and they did so in a very expeditious manner. The bill I'm signing today is large enough to have an impact -- amounting to more than $152 billion this year, or about 1 percent of GDP. The bill provides temporary tax incentives for businesses to make investments in their companies so that we create new jobs this year. The bill provides individual tax relief in the form of tax rebates. These rebates will amount to as much as $600 for individuals and $1,200 for married couples, with additional rebates for families with children.

The members resisted the temptation to load up this bill with unrelated programs or unnecessary spending, and I appreciate that. I thank the members for acting quickly. I thank them for acting to provide immediate tax relief to the American people.

There are other ways we can work together to help our economy through this rough patch. I know many Americans are worried about meeting their mortgages. My administration is working to address this problem. Last fall, for example, we brought together the HOPE NOW alliance to help struggling homeowners avoid foreclosure. Yesterday, Secretaries Paulson and Jackson joined HOPE NOW in announcing what is called "Project Lifeline," it's a targeted outreach effort to help more at-risk homeowners.

Congress can also help by passing legislation to reform the regulation of Fannie Mae and Freddie Mac, to modernize the Federal Housing Administration, and to allow state housing agencies to issue tax-free bonds to help homeowners refinance their mortgages. I hope that Congress can act on these matters quickly.

Helping our economy requires us to take action, it is equally important that we not overreact. Our economic success is not the result of the wisdom of politicians in Washington, D.C. -- but of the collective wisdom of the American people. Shopkeepers, farmers, laborers, entrepreneurs in the private sector have given us the most -- the strongest and most resilient economic system in the world.

Over the past seven years, this system has absorbed shocks -- recession, corporate scandals, terrorist attacks, global war. Yet the genius of our system is that it can absorb such shocks and emerge even stronger. In a dynamic market economy, there will always be times when we experience uncertainties and fluctuations. But so long as we pursue pro-growth policies that put our faith in the American people, our economy will prosper and it will continue to be the marvel of the world.

Now I'm honored to sign the Economic Stimulus Act of 2008.