For Immediate Release
Office of the Press Secretary
February 12, 2008

THE PRESIDENT: Thank you all for coming. Good afternoon, and welcome to the White House. Laura and I are honored that you all came, as we celebrate African American History Month. This is a month in which we recognize the many African Americans who've made great contributions to our country. We honor the talent and their courage. We renew our commitment to securing liberty and justice for every American. That's why we're here.

If I skip some of the notables, it's because I'm going to say something about them a little later on. (Laughter.) So, Congressman, I'll be with you in a minute. (Laughter.)

I appreciate Dr. Leonard Haynes, who's the Executive Director of the White House Initiative on Historically Black Colleges and Universities. I am proud -- Doc, thanks for coming. I'm proud to welcome all the presidents from the Historically Black Colleges and Universities here today; really appreciate your service to the country.

I want to thank Ron Langston, National Director of the Minority Business Development Agency. Roslyn Brock, Vice Chairman of the NAACP -- Roslyn, thank you for coming. Somewhere -- there you are. I thank John Fleming, President, Association of the Study of African American Life and History. Reverend Al Sharpton, and his wife Dominique -- Reverend, it's good to see you.

Thank you all for coming. There's a lot of other notables here. Just consider yourself welcomed. (Laughter.)

The theme of this year's African American History Month is a celebration of America's cultural diversity. It is a tribute to a scholar who deepened our appreciation for diversity: Carter G. Woodson. When Dr. Woodson began his career in the early 20th century, most Americans knew little about African American heritage. Dr. Woodson set out to correct that. His scholarship helped pioneer the field of African American studies. And by the time he passed away in 1950, this son of freed slaves had become known as the Father of Black History.

It is important for all our citizens to know the history of the African American struggle for equality. We must remember that the slave trade brought many Africans to America in chains, not by choice. We must remember how slaves claimed their God-given right to freedom. And we must remember how freed slaves and their descendants helped rededicate America to the ideals of its founding.

Our nation has come a long way toward building a more perfect union. Yet as past injustices have become distant memories, there's a risk that our society may lose sight of the real suffering that took place. One symbol of that suffering is the noose. Recently, there have been a number of media reports about nooses being displayed. These disturbing reports have resulted in heightened racial tensions in many communities. They have revealed that some Americans do not understand why the sight of a noose causes such a visceral reaction among so many people.

For decades, the noose played a central part in a campaign of violence and fear against African Americans. Fathers were dragged from their homes in the dark of the night before the eyes of their terrified children. Summary executions were held by torchlight in front of hateful crowds. In many cases, law enforcement officers responsible for protecting the victims were complicit in their deeds [sic] and their deaths. For generations of African Americans, the noose was more than a tool of murder; it was a tool of intimidation that conveyed a sense of powerlessness to millions.

The era of rampant lynching is a shameful chapter in American history. The noose is not a symbol of prairie justice, but of gross injustice. Displaying one is not a harmless prank. And lynching is not a word to be mentioned in jest. As a civil society, we must understand that noose displays and lynching jokes are deeply offensive. They are wrong. And they have no place in America today. (Applause.)

This afternoon we honor four Americans who understand what this symbol represents, and who are leading the way toward ending racial injustice across our land.

Congressman John Lewis earned his place in history long before winning a seat in the United States Capitol. As a young man, he became one of the leaders of the civil rights movement. He organized freedom rides and sit-ins and voter registration drives. One Sunday in 1965, he set out to lead a march from Selma to Montgomery. The marchers never made it past the rows of state troopers outside Selma. But their message made it all the way to Washington, D.C. Five months later, Congress passed the Voting Rights Act. And more than 40 years later, John Lewis continues to inspire us -- and we're blessed to have him here today. (Applause.) 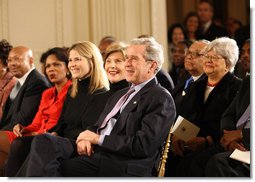 William Coleman has lived a life of many firsts. After graduating first in his class from Harvard Law School, he went on to become both the first Black American to clerk on the Supreme Court, and the first to hold a Cabinet post in a Republican administration, as Secretary of Transportation under President Gerald Ford. William Coleman has also helped open doors of opportunity for others. He worked alongside Thurgood Marshall, father of this good man, on the legal team that triumphed in Brown versus Board of Education. This ruling exposed the fallacy of "separate but equal" -- and it helped return America to the great truth that "all men are created equal." For this, we owe William Coleman our lasting thanks. We're honored to have you today, sir. (Applause.)

Three years after Brown versus Board of Education, nine students in Little Rock stepped forward to test the Supreme Court's ruling. On September 25, 1957, federal troops escorted them into the city's all-white Central High School. Once inside, the Little Rock Nine were spit on, harassed, and called names. One of the students was a senior named Ernest Green. As graduation day approached, some suggested it might be safer for Ernest to receive his diploma in the mail. Many people would have taken this advice -- not Ernest Green. In May of 1958, Martin Luther King, Jr. was on hand to watch Ernest become the first African American to graduate from Little Rock's Central High School. We're honored to welcome Ernest Green to the White House during the 50th anniversary -- (applause.)

And finally, as a young boy, Otis Williams remembers his mother packing food for their move from Texas -- oh, what a tragic mistake -- (laughter) -- to Detroit. She did so because restaurants along the route refused to serve African Americans. In Detroit, Otis Williams grew up to become the leader of one of the most successful vocal groups in the history of our country: the Temptations. This group has recorded 37 Top 40 singles -- including four Number One hits on the pop charts. Their success paved the way for other African American artists. Their melodies continue bringing Americans of all races together to this day.

Otis can remember performing in a venue in South Carolina, where blacks and whites in the crowd were separated by a barrier. The next year when the Temptations returned, the racial divide was gone. As Otis once put it, "The highest achievement for me has been ...to have our music penetrate all kinds of barriers -- for it to be colorless." The music of the Temptations has given countless Americans sunshine on a cloudy day -- (laughter) -- and we cannot help ourselves from loving them. (Laughter.)

Throughout African American History Month, we remember how individuals, African American leaders of all kinds helped bring our nation together. We recognize our nation still has a long way to go. But in the example of the leaders like those we honor today, we see strength greater than any division. And we see hope for a day when freedom rings from every mountainside, and every corner of the country.

And now it is my great pleasure to introduce the Temptations. (Applause.)