For Immediate Release
Office of the Press Secretary
February 12, 2008

PRESIDENT BUSH: It's been a honor and a pleasure to welcome the President of Mali here to the Oval Office.

We discussed a variety of issues. I was touched by the President's concern about the life of the average citizen in Mali. We are partners with the -- with the President and the people of Mali, through the Millennium Challenge Account. And one reason we worked with the government is because they've agreed to fight corruption, and support the education and health of its citizens. This is a country that's committed to the rights of its people, and we're proud to be standing side-by-side with you. 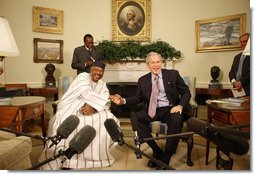 Two issues that are very important to this administration, Mr. President, were the issues that my wife, Laura, discussed when she came to your country. One is literacy, and two is the eradication of malaria. And I assured the President that our commitment remains strong to both important issues. And I thank him very much for his hard work in helping his citizens deal with HIV/AIDS.

And finally, the President and I spent a fair amount of time talking about the dangers of radicals and extremists associated with groups like al Qaeda. And we talked about the need for close cooperation to protect the innocent people from those who murder the innocent in order to achieve their dark political vision.

So it's been my honor to welcome a good man here to the Oval Office.

PRESIDENT TOURÉ : (As translated.) First of all, I would like to convey to the President of the United States the sympathies and solidarity of the people of Mali because of the destruction --

PRESIDENT TOURÉ -- caused by the tornados in some of the southern states of the United States.

And then I told Mr. President that we were sensitive and impressed by the impression that we had from the visit of Mrs. Laura Bush to Mali sometime ago. Also, thank the President for the -- our friendship between the people of the United States and the people of Mali, and the cooperation between Mali and the United States that we do entertain on both sides since the independence of Mali in 1960.

But I could also come to the United States just to tell Mr. President, thank you, because the President had some initiatives not only for Mali, but also for Africa, which we believe are historical initiatives, and which we do have the Millennium Challenge Corporation, the greater participation against the fight against AIDS through the Global Fund, the initiative on the eradication of malaria, and not to forget the presidential initiative on literacy in Africa, which is very important in our view, because when you want to develop you need to also improve basic education.

PRESIDENT TOURÉ : So I emphasized to the President that -- and I reaffirm -- that Mali signed and Mali averred to all different initiatives on the fight against terrorism. So it is humanly inadmissable, unacceptable to see or to assist or to be indifferent to the suggestion that we are seeing to some practices which really do not deserve to exist.

So we had a fruitful exchange of views on our cooperation. So I said to Mr. President that I would like to thank him and also to convey all the gratitude of the people of Mali, but I emphasized also the fact that may God save Mali and the United States. President, thank you very much.