For Immediate Release
Office of the Press Secretary
February 10, 2008

MRS. BUSH: Good evening, everyone. Welcome to the White House. Mr. President, members of the Cabinet who are here with us today, members of Congress, Lincoln scholars and enthusiasts, and everyone from Ford's Theatre: Thank you very much for joining us today to pay tribute to one of America's greatest Presidents and most exemplary men.

Ford's Theatre is best known as the site of President Lincoln's tragic death, but it was also the site of many happy moments in President Lincoln's life. The theater was Lincoln's refuge from the demands of a wartime White House. It was a favorite venue for indulging his love of the performing arts. Even as a young man, Lincoln memorized passages from Shakespeare. As President, he brought a wide variety of performers to the White House, from a Native American vocalist to a nine-year-old piano prodigy. 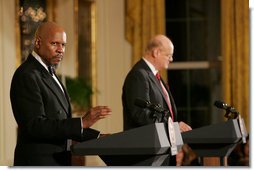 After the Union's devastating losses at Fredericksburg, President and Mrs. Lincoln, along with members of his Cabinet, were buoyed by the antics of P.T. Barnum's Commodore Nutt, a 29-inch tall singing and dancing circus star, who barely reached the President's knee.

President Lincoln so loved the performing arts that one night in 1861, as he worked in his office upstairs, he was lured downstairs by the voice of Meda Blanchard, who may have been the first opera singer ever to perform in the executive mansion. Ms. Blanchard had been serenading guests of Mrs. Lincoln's, and was about to depart, when the President appeared. Lincoln requested an encore, so the performer sat at the piano, and according to one observer, laid off her shawl from her shoulders that no south would have ever seceded from. (Laughter.) Lincoln apparently agreed. When the President attended her public concert four days later at the Willard Hotel, one newspaper noted that Lincoln was wholly absorbed by Blanchard's siren voice.

Ford's Theatre honors Lincoln by introducing new generations to the performing arts he so loved. The theater treats thousands of young people to their first live dramatic performance. Through museum exhibits and classroom programs, the theater educates American students and international visitors about the circumstances of Lincoln's death and the significance of Lincoln's life.

Every year the Ford Theatre bestows its highest honor, the Lincoln Medal, on individuals who exemplify the accomplishments and character of our 16th President. Tonight we're honoring two people who have upheld Lincoln's ideals of equality and service, Dr. Benjamin Carson and former Supreme Court Justice Sandra Day O'Connor.

Tuesday is the 199th anniversary of Lincoln's birth, and the beginning of a two-year commemoration of his bicentennial. This evening we'll begin the celebration here, at the White House, by hearing from distinguished Lincoln scholars, Allen Guelzo and Richard Norton Smith. We'll also be treated to performances by two outstanding Lincoln interpreters, Craig Wallace and Avery Brooks. 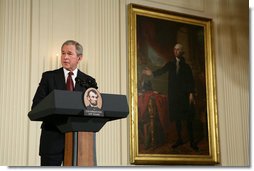 Now I'd like to present our first Lincoln scholar and speaker, Richard Norton Smith. (Applause.)

THE PRESIDENT: Welcome. Laura and I are glad you're here. Rex, thank you for taking the lead for Ford's Theatre. If any citizen wants to know how to make a solid contribution to Washington, D.C., support Ford's Theatre; it's worth it. Members of my Cabinet, thanks for coming. Members of Congress, we're glad you're here. I've got two tasks. One is to present the Lincoln Medal, and invite you to a buffet. (Laughter.)

I really want to thank Richard for coming. I appreciate your words, Allen, thank you very much, and Craig Wallace. Avery, I've been subject to a few presidential impersonations myself. (Laughter.) I'm confident Abe would have liked it. (Laughter.) I really appreciate you all coming. It made this a very special evening. I do want to welcome all the Lincoln scholars here, and all the Lincoln enthusiasts. We're really glad you're here.

I also am amazed that 200 years have gone by. It just doesn't seem all that long ago, does it? But it's fitting that we honor Abe Lincoln. He, of all the successors to George Washington, none had greater impact on the presidency and on the country. And he remains a presence here in the House. I'm often asked, do you ever see Lincoln's ghost? And I tell people, I quit drinking 22 years ago. (Laughter.)

But his office is directly above us. At the center hall, there's a likeness in marble. His portrait hangs in the Oval Office, and there's a fabulous portrait of Lincoln in the State Dining Room. And that's the way it should be. He was a fabulous man, and a great President. His life was one of humble beginnings, and steadfast convictions. And so we celebrate his deeds, we lift up his ideals, and we honor this good man.

And it's my pleasure tonight to honor two really fine Americans. Each year Ford's Theatre presents the Lincoln Medal to recognize high achievement and personal attributes that embody the character of the 16th President.

Dr. Ben Carson is the Director of Pediatric Neurosurgery at Johns Hopkins Hospital. He is one of the most respected surgeons in the world. Twenty years ago, when a 70-member surgical team made history and separated a pair of Siamese twins, the gifted hands leading the team belonged to this good man. Raised with his brother and a single mother -- who is here -- Ben Carson didn't get much handed to him as he grew up. But his mother pushed him to learn, and taught him to trust in the ways of heaven. From his days at Yale and the University of Michigan Medical School, colleagues have known Dr. Carson as both a skilled professional and a deeply reflective man. 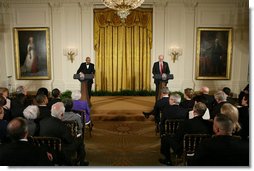 His many current duties include service on the President's Council on Bioethics, and a tireless commitment to helping young people find direction and motivation in life. He reminds them that all of us have gifts by the grace of the almighty God. He tells them to think big, to study hard, and to put character first. He tells them to be nice, because in his words, "If you're nice to people, then once they get over the suspicion of why you're being nice," -- (laughter) -- "they will be nice to you." (Laughter.) His example gives eloquent testimony to the value of perseverance and to the endless promise of America. So tonight we proudly honor Dr. Ben Carson. (Applause.)

President Ronald Reagan called Sandra Day O'Connor a "person for all seasons," and few Americans have shown a broader range of talent. She is, after all, the only Supreme Court Justice ever inducted into the Cowgirl Hall of Fame. (Laughter.) Born in El Paso, Texas, she spent much of her childhood on a ranch in Arizona, where from a young age she learned to ride horses, mend fences, and shoot a rifle.

She was an academic star, attending Stanford Law School. It was a different era when she got out of law school. After all, not many law firms wanted to hire a woman. But with her intellect, independent spirit and sense of adventure, Sandra Day O'Connor continued a steady rise in the world. She became a state senator, a state court judge, and the first woman on the highest court in the land.

For 24 years, Justice O'Connor stood out as a careful, fair-minded jurist. Sandra Day O'Connor is a great mom to her three sons, and she has been a blessing to her husband, John. This lovely lady remains one of the most admired women of our time. She's lived a great American life, and our nation is proud to honor you once again, Justice. Welcome. (Applause.)

(The medals are presented.) (Applause.) 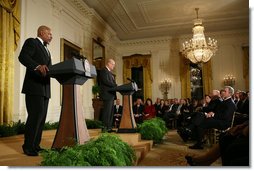