For Immediate Release
Office of the Press Secretary
February 4, 2008

THE PRESIDENT: Thank you all for coming. I just met with my Cabinet, where we discussed a lot of issues. And one issue we discussed is the budget. I submitted the budget today to Congress -- it's on a laptop notebook, an e-budget. It saves paper, saves trees, saves money. I think it's the first budget submitted electronically. 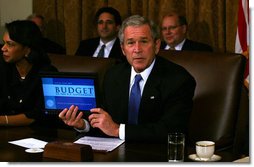 And it's a good budget. It's a budget that achieves some important objectives. One, it understands our top priority is to defend our country, so we fund our military, as well as fund the homeland security.

Secondly, the budget keeps our economy growing. It's central that we make sure that we deal with the uncertainties -- the economic uncertainties we face. And that's why we're working hard with the House and the Senate to get a growth package out quickly that will put money in the hands of consumers and provide incentives to small businesses and large businesses to invest.

Thirdly, we recognize that in order for this economy to grow, it's important to make the tax relief permanent. And that's what this budget reflects. It's a budget that boosts money for education and health and housing. It helps deal with the issue of making the tax code more fair for individuals who want to buy health insurance in the individual market.

This budget is one that keeps spending under control; discretionary spending is held to less than 1 percent. It eliminates 151 wasteful or bloated programs, saving the taxpayers $18 billion. It also takes a hard look at entitlement growth over the next five years, and provides specific recommendations to save $208 billion over those five years. At the same time, the budget achieves balance by 2012.

This is a good, solid budget. It's not only an innovative budget, in that it's coming to Congress over the Internet, it's a budget that's balanced -- gets to balance in 2012 and saves taxpayers money. 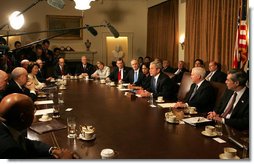