For Immediate Release
Office of the Press Secretary
February 1, 2008

THE PRESIDENT: Thank you, all. Thank you for letting me come by to say hello. A couple of observations -- one, you work for a fabulous company of caring people. I appreciate, Don, your hospitality. I am still trying to recover from the kindergarten experience. (Laughter.) I mean, you talk about sapping a person's energy. (Laughter.) But it was a fabulous experience.

I got to see Hallmark cards being made, and the fella kindly made me one that said, "For your daughters." It was sweet, but it just didn't have any warning in there about how to conduct myself for the upcoming wedding. (Laughter.) 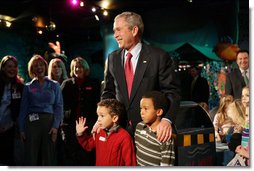 I'm here in Kansas City for a couple reasons. One, I do want to spend a little time on the economy. I had breakfast this morning with entrepreneurs, small business owners; I want to find out what's on their mind. I'll tell you that there's a sense of optimism I was pleased to hear. People are confident about the future -- at least, these business owners were -- and they should be. Interest rates are low, inflation is low, productivity is high. But there are certainly some troubling signs. There are serious signs that the economy is weakening and that we got to do something about it.

Today we got such a sign when after 52 consecutive months of job creation, we lost 17,000 jobs. The unemployment rate went down, but nevertheless, a serious matter is that for the first time in 52 months that we didn't create jobs.

And so the question is what do we do about it? Does government have a responsibility and, if so, what is it? I do think government has a responsibility. I think government can take decisive action to help us deal with this period of uncertainty. One such action is to help people stay in their homes. We got some of our citizens purchased mortgages that they can't afford now. Hopefully the reason -- hopefully they didn't get deceived, and if they did, the government has a responsibility to take care of that. In other words, we don't want people buying a mortgage and the person who sold them the mortgage didn't fully disclose the reset inherent in a subprime note.

But we can help people stay in their homes by connecting the borrower with the mortgage industry. Now, what makes it difficult in this day and age is that when I bought a home, I sat down with the saving and loan officer -- and had I gotten in a financial bind, I would have gone back to that same officer and said, you own my note, help me refinance so I can stay in my home. Today, that financial institution probably doesn't own the note anymore. Somebody else owns the note, and therefore we're trying to make sure we connect the borrower with somebody in the mortgage industry that will help them refinance.

And that's why we started what's called the HOPE NOW Alliance. Security Paulson and Secretary Jackson are bringing people together from the private sector, and they couple that with an information campaign, so that people who have a subprime loan know how to refinance and can find somebody to help them refinance. It's been a complicated matter, but nevertheless we're very much engaged in helping people sort through what is definitely a difficult period in their life. 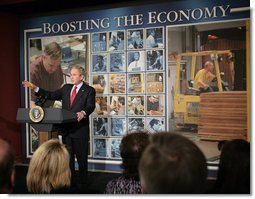 The government can help. The Federal Housing Administration has got the capacity to help refinance homes, and they need to expand the authority of the FHA to do it. And Congress needs to get that bill passed. I mean, this will be a positive step toward helping people stay in homes. And that's what we want to do. See, you notice, I'm not saying we're going to bail out the lenders -- we're going to help the individual person be able to keep their home. It's in the interest of the country we do that.

Secondly, there are bonding authorities, tax-exempt bonding authorities that are now used to help people buy new homes. States and local governments ought to be able to use that money to help people stay in the home they have. And that will be helpful as well. So here are some constructive measures that we can take. There's a cyclicality when it comes to housing interests -- housing industry. But in the meantime, or during this down cycle we want to help individual Americans.

Secondly, a concern is whether or not our consumers will lose confidence in our economy. You don't want that to happen at Hallmark -- you want the consumers to still buy your product on a regular basis. And one way to address that issue is to have a temporary, robust tax rebate. And that's what we're working on in Congress. You hear this discussion of a stimulus package -- well, a key component of that package is to give you some of your money back so you can spend it.

And the House of Representatives passed a good package. The administration worked with the House -- it may surprise you that Republicans and Democrats can actually get something done in a constructive fashion, but it happened in this case, for the good of the country. And now the Senate is debating the bill, and it's very important for the Senate to finish their work quickly because the sooner we can get money into our consumers' hands, the more likely it is, is that this economy will get back -- recover from this period of uncertainty. 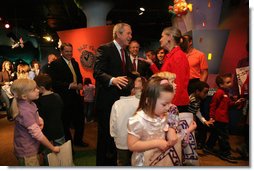 The fundamentals are strong, we're just in a rough patch, as witnessed by the employment figures today. And I'm confident we can get through this rough patch and one way to do it is for Congress and the administration to work collaboratively and get this deal done.

Now, a key component, as well, of a growth package is to encourage businesses to invest. Why would you do that? Well, if Hallmark buys a new piece of equipment, somebody has to make that equipment. In other words, job creation happens when people make investments. And if you, therefore, stimulate businesses, both large and small, to make investments this year, as quickly as possible, it means somebody is more likely to keep work and the economy will continue to be strong.

So the two key components of this package are, one, enhance consumerism by giving consumers money. It's not like a great gift -- after all, it's your own money, we're just giving it back to you and encouraging businesses to invest. I believe we can get this package done; I know it has to be done quickly. I appreciate the fact that the Senate is trying to work through this as quickly as possible, so I'm just urging them to get it done. Because the sooner this package makes it to my desk, that actually focuses on ways to stimulate growth, the better off our economy is going to be.

Finally, we need to be thinking about how to effect economic growth in the long-term. We'll deal with the short-term issue, but as we do so, we also need to be wise about policy so that we can continue this period of growth that we've had.

A couple points I want to make to you on that. One is it's important for Hallmark to be able to sell your cards overseas. I mean, the more people that are exposed to the Hallmark product, the more likely it is that they'll buy. You just want a chance to compete. And so trade is an important aspect of -- to making sure our economy remains strong. There are some folks who worry about trade. They want to protect America from products from overseas. I am concerned about protectionism, and so should you, because if we end up having trade wars, it's going to be less likely Hallmark products will be sold overseas.

My attitude is, just give us a chance, let's level the playing field. We can compete with anybody, any time. We've got to have confidence in our capacity to compete in the world. And trade is an important aspect for keeping economic vitality alive. Education is important. You've got some awfully smart people working here, but they need to be -- the future of Hallmark depends upon having an educated work force. That's the way it is in most U.S. companies.

And so I'm very much focused on making sure our education system gets it right in the beginning -- "right in the beginning" means teaching kids to read and write and add and subtract. I cannot stand a system that refuses to measure. I think it's an appropriate question to ask, can a child read, and if not, what do you intend to do about it?

Accountability is an integral part of making sure this system doesn't leave people behind. I am passionate on the subject of measuring because I used to be a governor of a state and I knew who got shuffled through the schools: inner-city kids; "These are people too hard to educate, let's just move them through"; parents who -- kids whose parents don't speak English as a first language. It's unacceptable to America not to insist that every child gets a good education. And so I'm going to work with Congress on this No Child Left Behind law, which is a very important part of making sure the workforce of the future is educated and ready to compete in a global economy.

Finally, taxes -- you know, I'm sure you've heard that, well, we need more money in Washington; therefore, we're going to raise your taxes. Of course it's disguised by saying, we're only going to tax rich people -- but that's not the way it works. Rich people tend to hire lawyers and accountants, and you get stuck with the bill. We don't need more money. We need to prioritize your money. We need to be wise about how we spend your money.

Raising taxes in a time of economic uncertainty would be bad for the economy and it would be bad for our people. I believe we ought to trust Americans to spend their money. I mean, the truth of the matter is you can spend it more wisely than the government can. And so in my State of the Union the other day I called upon Congress to make the tax cuts permanent. I want to deal with this aspect of uncertainty. See, if you think your tax bill is fixing to go up -- which it is, unless Congress acts; it will be going up in a couple of years -- it could change your behavior. It could cause people to pull back and not be confident about the future.

And I also called on them to stop this business about putting special projects in legislation without being voted on. That doesn't make any sense. I mean, our process is one where there should be transparency and -- like, if a project is important enough for a member of Congress to slip into what's called a conference report, that project ought to be important enough for there to be a full vote -- members of Congress get to look at and see if it makes any sense.

So I've got an agenda for Congress. I'm looking forward to working with them on how to stimulate the economy in the short-term, but make sure we remain a strong economy in the long-term. And I'm looking forward to working with them. I like the spirit I found up in the halls of Congress. There's still a little politics in Washington, D.C., but that's not to say we can't work for the common good.

I appreciate you all giving me a chance to come by and visit with you. I hope you can tell I'm optimistic about the future of the country, realistic about the issues we face, and have -- got a plan to deal with them. God bless you. Thank you. (Applause.)