For Immediate Release
Office of the Press Secretary
February 1, 2008


MRS. BUSH: Good morning. This is Laura Bush. For the weekly radio address, President Bush has handed the mic over to me. And today, I'd like to talk about something that's close to my heart -- America's heart health.

February is American Heart Month -- a time to start heart-healthy habits, and to learn about the risk factors for heart disease. These risk factors include smoking, being overweight, lack of exercise, diabetes, high blood pressure and cholesterol, family history, and age. Heart disease affects more than 80 million people in the United States and claims the life of one American every minute. 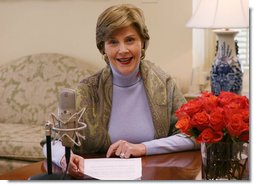 By now, many women who've tuned in may be tempted to tune out. A few years ago, I might have. Like many women, I assumed heart disease was a "man's disease." But the Heart Truth is this: that heart disease is the leading cause of death among American women. In 2002, the National Heart, Lung, and Blood Institute launched the Heart Truth campaign, and asked me to join.

Over the last five years, I've seen the Heart Truth campaign spread the word to women about how they can protect their heart health. Symptoms of a heart attack can be different in women than in men. Symptoms in women can include persistent fatigue, difficulty breathing, and a pain in the jaw or neck. If women have these symptoms, they should go immediately to the hospital.

Nothing draws attention like a little red dress, so this is the Heart Truth's symbol. Across the country, people are rallying around that dress. Women are taking heart disease more seriously. So are their doctors. And every year from 2000 to 2005, heart disease deaths among women decreased.

This is good progress, but we still want more people to know the Heart Truth. Too many women, especially African-American women, die of heart disease. More than 80 percent of middle-aged women have at least one risk factor and many of them don't know it.

Last year, as part of my work to tell the Heart Truth, I went on the Rachael Ray show, where I described the symptoms of heart attacks in women. One woman who watched, Candy Stauffer, says that a few weeks after she saw the show she woke up feeling nauseated and bothered by pain in the jaw. Candy's daughter remembered what she'd heard on Rachael Ray. And because Candy and her daughter paid attention to the symptoms of heart trouble, Candy got to the emergency room in time to be treated.

Since her close call, Candy has started exercising every day. She's dropped 45 pounds. Now she's calling on others to take better care of their hearts. "My family is more aware," Candy says. "My friends are more aware." Even in line at the grocery store, Candy will tell other people about heart disease.

I'm proud to serve as the Heart Truth's official national ambassador. But I'm even more proud of America's unofficial heart-health ambassadors. Across the United States, doctors, researchers, and patients like Candy Stauffer are telling the Heart Truth, and they're saving women's lives. This American Heart Month, all of us can be Heart Truth ambassadors. Start by protecting your own heart, and spread the word to others. February is a month known for Valentines. This February, encourage your loved ones to take care of their health. It's the best Valentine's gift you could possibly give. Thanks for listening.

I can't find a radio station that carries the radio address. Do any stations in Pomona carry it?
Click here for answer....