For Immediate Release
Office of the Press Secretary
January 29, 2008

THE PRESIDENT: Director Nussle, thank you. Before I sign the executive order on earmarks, I do want to congratulate the House of Representatives for overwhelmingly passing a economic growth package that would help our economy. The temptation is going to be for the Senate to load it up. My concern is that we need to get this bill out of the Senate and on my desk so the checks can get in the hands of our consumers, and our businesses can be assured of the incentives necessary to make investments. 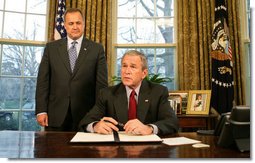 Anyway, I do want to thank the Speaker and Leader Boehner for working quickly and working in a bipartisan fashion. This is a very good start.

And now I'm going to sign this executive order. Last night I said that it's very important for Congress to earn the trust of the American taxpayer, and one way they should do so is to end the practice of earmarks. Now, I said last year that they should voluntarily cut the number in half -- not only the number, but the amount of earmarks in half. They chose not to do so. So last night I told the Congress that I would veto any bill, appropriations bill, that does not cut the number and the amount of earmarks in half.

Secondly, there's a practice here in Washington, and I'm not sure many of our citizens understand it takes place, where members just put in special spending projects into what's called report language. That means that these projects never were voted on, never really saw the light of day. And this executive order says that any such earmarks this year and into the future will be ignored by this administration and, hopefully, future administrations, unless those spending projects were voted on by the Congress.

The American people expect there to be transparency in the process. They expect the people to be -- here in Washington to be wise about how they spend their money, and this executive order will go a long way toward sending that signal to the Congress, and at the same time, earning the trust of the American people.

So, Mr. Director, thank you for your leadership on the issue. It was the right course of action to take, and I am proud to have signed the executive order. Thank you.