For Immediate Release
Office of the Press Secretary
January 29, 2008

Last night in my State of the Union, I highlighted the important work being done by faith-based organizations. This morning I was pleased to visit one of these inspiring groups, the Episcopal Community Services of Maryland, right here in Baltimore. I cannot thank you enough for the chance to take a tour. And, Bonnie, you and your staff have been most hospitable. 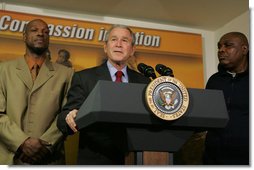 I've come to look firsthand at the Jericho Program, which is helping former prisoners make a successful transition back to society. There's no more important goal than to help good souls become -- come back to our society as productive citizens. I'm honored to have been with those who have worked hard to deal with their circumstances in such a way that they become productive citizens. I'm standing next to two such men, and I met probably seven others downstairs.

I do want to thank Bonnie Ariano for joining me and the Secretary. I'm going to talk about the Secretary's role here in a minute in this important program. I thank very much Greg Carpenter, a former prisoner who is now a mentor, a leader in this program. And he's -- I appreciate his heart.

I welcome Jay Hein, Director of the Office of Faith-Based and Community Initiatives at the White House. I do want to thank State Senator David Brinkley for joining us. Senator, I'm proud you're here. I appreciate the Jericho staff. I want to thank the Episcopal Community Services of Maryland Board of Directors. I appreciate you all coming. I thank you very much for supporting this program.

When I came into office, the nation's traditions of religious freedom and equal opportunity were facing unnecessary obstacles. Throughout America, religious and community groups were providing effective assistance to people in need, but there was a great reluctance on the part of the federal government to help them. There was the notion that somehow that there needed to be a clear separation of church and state, and therefore, we shouldn't be using taxpayers' money to help programs that were helping to meet important national goals.

Unfortunately, in some instances where there was an interface with government, people were told that in order to interface you have to take the cross off the wall, or take down the Star of David. In other words, you had to abandon the very principle by which you existed in the first place. And it made no sense. If a program was effective because they were willing to recognize a higher power, if a program was effective because people responded because they felt a call from a higher power, than to deny the higher power really reduced the effectiveness of the program.

So seven years ago my administration created the White House Office of Faith-Based and Community Initiatives, to deal with this problem. We wanted to focus our government and taxpayers' money on solutions, on effective programs, and we recognized that many of the effective programs existed in the faith community. Washington, D.C. oftentimes is a process-oriented town. We need to work hard to make it a results-oriented town. And if one of the compelling national interests is to help good people who have been in prison come back and readjust, and learn skills and attitudes necessary to be a productive citizen, if that's an important national concern, then we ought to turn to programs that are meeting those results. That's what we ought to do.

And that's what's happening right here. That's why I'm here. This is a program that is working, and it is supported by the federal government, and it should be.

Since 2001, the government has leveled the playing field. That's one of our objectives, early on in my administration, was to level the playing field, to make it easier for faith-based and community groups to compete for billions of dollars in federal grants, grants that would help them accomplish their objectives.

With this newfound support, America's faith-based groups are getting results. If you ask people here, is a program working, the answer is, absolutely. It's one thing to ask the Director; more importantly it's another thing to ask those who have benefitted. These are men who were, in some ways, lost, and lonely, and found love and redemption at Jericho. I'm going to talk about them in just a second. But there are all kinds of programs that are helping meet our national needs and goals. There are programs to help provide mentors for 70,000 children whose parents are incarcerated. There are programs to help deal with drug addiction and alcohol addiction, programs to help young people in our inner cities escape gangs. These are all programs where a faith-based or community group has dedicated their lives to solve a problem. And it makes sense for the federal government to give these programs a chance to access taxpayers' money. 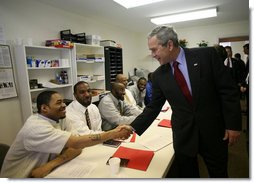 When we begin [sic] the work we didn't settle for just opening an office in the White House; we opened 11 offices for faith-based and community initiatives throughout the federal government. It's one thing for the White House to have an office. But most of the money -- or all the money, for that matter -- is appropriated to different Cabinet officers and their secretariats, and then those distribute the money. And so we wanted to make sure that this faith-based initiative was rooted throughout the government.

And one of the offices is at the Department of Labor, ably headed by Secretary Elaine Chao, a member of my Cabinet. Every year, nearly 650,000 men and women are released from prison, and one of her top priorities, along with the Department of Justice, is to help those readjust to our society. And there's a compelling reason to -- half the people getting released from prison go back. And the idea is to help deal with that issue. We don't want people going back to prison. We want to help them readjust in society. And it turns out that faith-based programs are very effective. And this is such a program.

The whole purpose of Jericho is a prisoner re-entry initiative. That's why you exist. It's interesting how a program like this works. This is a small program, really, to some of the really large faith-based programs. And by the way, part of our initiative was to encourage what I call social entrepreneurship. It's to stand by side-by-side with smaller programs, because smaller programs, when they're proved to be successful, turn out to be larger programs, and larger programs obviously help more people -- but they also serve as an example.

I like the fact that you call yourselves "the Jericho." After all, the walls came tumbling down. That's what's happening here -- old walls are tumbling down, and new lives are being built. 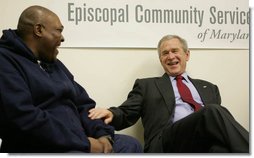 One of the great things about a faith-based program, one of the great aspects of a faith-based program, is there's a lot of people in our society who hear the call to love a neighbor. That's, after all, one of the key tenets of faith: Love a neighbor like you'd be -- like to love -- be loved yourself. And so what you find here is programs supported by people who want to make a difference in our society, and it doesn't require a government law to cause them to do so. You don't need to pass a law and sign a law that says, you will love your neighbor; there's a higher law that does that. And these programs just gather that love, and work to save societies one soul at a time.

And we've got two such souls here. Adolphus Mosely -- he came here last summer after having been released from prison, and he graduated from one of Jericho's work training programs. And he started -- got him a new job. And he's proud of that.

By the way, first there's a -- people have got to come here and realize that there are people who love them and want to help them. And second, there is the practical application of helping somebody find work. Addiction is hard to overcome. As you might remember, I drank too much at one time in my life. I understand faith-based programs. I understand that sometimes you can find the inspiration from a higher power to solve an addiction problem. This program helps along these folks who have been dealing with addictions.

I also appreciate Thomas Boyd. He spent nearly four years in prison. He came here in September. And thanks to the program, he's got a new dilemma: He had to choose between several job offers. (Laughter.) That's a good dilemma to have. He's supporting himself. He's -- both these men are reunited with their daughters. They find great pride in the fact that they have chosen a path with the help of the folks at Jericho. They shared with me their love for their little girls -- and I know the feeling. And I appreciate the fact that -- you know, that you're on your feet, and you're feeling good and strong, and you're assuming the responsibility of fatherhood.

So I've come to herald programs such as the Jericho Program. Our government should not fear the influence of faith in our society. We ought to welcome faith-based programs. Last night I called on the government to make the Charitable Choice provisions of our law permanent. We shouldn't say to programs such as this, we'll help you through a Department of Labor and Justice grant, and then turn our back on the program when it's successful. There ought to be consistency of policy. Our government ought to welcome results. We ought to say, thank God there are people such as this in our neighborhoods and societies helping these good men.

So it's an honor to be here. I'm proud to be in the presence of Americans who care deeply about our country and are willing to do something about the future of the country, by helping lost souls find love and hope in their lives. And I want to thank the -- I want to thank very much the Episcopal Community Services for sponsoring this program.

Again, I want to thank you all for leading with your hearts; thank these two good men for joining me today. God bless you. Proud to be with you. Thank you.

All right. Thank you all.