For Immediate Release
Office of the Press Secretary
January 12, 2008

THE PRESIDENT: I want to thank these ladies from Kuwait for joining me and the Chargé. I'm really looking forward to the conversation. Laura had met with some before and came back very impressed by the spirit and desire of Kuwaiti women to be full participants in Kuwaiti society.

First, I'd like to thank His Highness for his hospitality. Secondly, last night in a conversation with His Highness I said, any regrets about having women vote in elections and run for elections? He said, absolutely not. He said, our society is enriched by the participation of our women. And he's right. All societies are enriched by the participation of women. I happen to believe very strongly in the freedom agenda and I think an integral part of that agenda is making sure that all participants in society have got an equal voice. 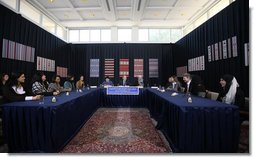 And one of the interesting -- I think when people look back at the history of the Middle East and history of the world it's going to be women who helped lead the freedom agenda. And it's happening right here in Kuwait. We've had people here at the table who ran for Kuwaiti parliament. Jenan ran, she said -- I told her the first race I ever ran, I lost -- (laughter) -- and she said, well, the first ran I ever ran I lost too. But she intends to win next time around.

And so I appreciate you all coming. I'm honored to be with you. We want to help -- part of our democracy agenda, of course, is the empowerment of women.

So thank you for taking time. Doctor, would you like to have a few comments?

DR. AL-MUBARAK: First of all we'd like to welcome you, Mr. President, as you probably watched our media this morning, the media said that we are saying it from the deep of our hearts: Welcome, Mr. President.

DR. AL-MUBARAK: Definitely we Kuwaitis look with great appreciation to the role that the American people played in the liberation of Kuwait, and we remember with great appreciation your father's role, Mr. Bush, and we call him here in Kuwait, Bu Abdullah -- that means he's so close to us, and the role that he played really still and forever we remember it as Kuwaitis.

And looking to the domestic issues in Kuwait, and especially the freedom that we are enjoying, looking to this group of ladies that are gathered totally by the Embassy, this is something that you don't have it much in lots of the countries and really the Middle Eastern countries. Our government has nothing to do with the gathering and nothing to do with this election of the people. And that gives a great idea that we speak our minds, we speak our hearts and are so glad to be with you, Mr. President.

And regarding the issues, we really have in mind, Mr. President, as women and as mothers, we're really asking you, as a person and as a leader of the great United States, to put an end for the agony of mothers in Kuwait, for the people and for our fellow citizens in Guantanamo. And we are sure that your human feelings so much with us in that and we need really your role and your assistance in that regard. 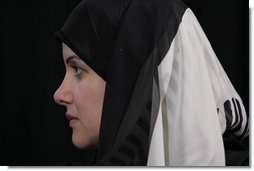 And also as citizens and people from this region, we deserve to live in peace. We are looking forward to live in peace, we are really -- not only in Kuwait, but in the whole region, this region, the Gulf region suffered for years and years from suffering from the wars and the impact of the wars. And we need your assistance, your help, your goodwill to have peace in this part of the world. And as you've played lots of roles in having peace and security in lot of part of the world -- you, your father and the other President.