For Immediate Release
Office of the Press Secretary
January 12, 2008

THE PRESIDENT: Hoo-ah! (Applause.) Yes, thanks for coming out. (Laughter.) It's good to see you. Command Sergeant Major Harbin, thank you. He's a silver-tongued fox. (Laughter.) Thank you for the introduction, Command Sergeant. I'm honored to be introduced by one of our enlisted personnel. After all, our military is strong because of the sergeant corps of the military. (Applause.)

THE PRESIDENT: -- as well as all the Department of Army civilians --

THE PRESIDENT: I'm here to thank you for your service. I want you to know the American people are mighty proud of you, and so am I. (Applause.) Sorry my wife isn't with me. She was here the other day though. She sends her best. I'm traveling today with the Secretary of State, Condoleezza Rice. (Applause.) I just had a meeting with our Ambassador and our Commander on the ground in Iraq. I'm proud to be here with Ambassador Ryan Crocker and General David Petraeus.

Since the Third Army was established at the close of World War I, its soldiers have proven themselves true to their motto, "The Third ... always first." (Applause.) You're the first bunch I've been talking to here on my trip -- first bunch of those wearing the uniform. People say, you looking forward to the trip? I said, one thing I'm really looking forward to is seeing the men and women who represent the United States in our military. The reason I am is -- anxious to be here is because we can't thank you enough, and we can't thank your families enough for doing the hard work necessary to protect the United States of America.

I appreciate what this Third Army did in World War II. I hope you do too, as well. After all, you're members of Patton's own. Played a vital role in the destruction of the Nazi war machine. They helped liberate about 12,000 towns; at least that's according to the history of the Third Army. From their noble ranks came soldiers with some of our nation's highest directors* [sic], including 19 recipients of the Medal of Honor. You are -- a distinguished history, and you're making history yourselves. Sometimes it's hard to forecast what the history pages are going to see when you're right in the midst of it all. Sometimes it's hard to judge how the Third Army will be talked about by future Presidents when you're in the midst of protecting the country, when you're in the midst of dealing in a dangerous region.

But I want to tell you what the history will say. The history will say, it was when you were called upon, you served, and the service you rendered was absolutely necessary to defeat an enemy overseas so we do not have to face them here at home. (Applause.) It will say loud and clear that this military, comprised of brave men and women who sacrificed on behalf of a noble cause called peace -- the men and women of this military understood that we're in an ideological struggle; that we're facing cold-blooded murderers who kill the innocent to achieve their hateful vision of a future. 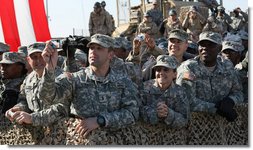 And they understood, history will show, that those who wore the uniform in the beginning of the 21st century understood a timeless truth that the ideology of -- based upon liberty is necessary for peace; that in this ideological struggle, on the short-term, we will find and bring the enemies to justice, but in the long term, the best way to defeat the ideology of hate is one with an ideology of hope, and that's one with liberty at its fundamental core. (Applause.)

It's hard work that you're doing, but it's necessary work. It's hard to be away from your home, but that's a soldier's life. When you get to emailing your family, you tell them I check in with you. (Laughter.) And you're looking pretty good. (Applause.) It looks like you haven't missed a meal. (Laughter.) But you also tell them that the message I brought was, they're in this fight as well. And the citizens of the United States of America respect our military, and we respect our military families. And this government will make sure that our families have a good life, with good support, when you're deployed overseas.

God bless you, and God bless the United States. (Applause.) 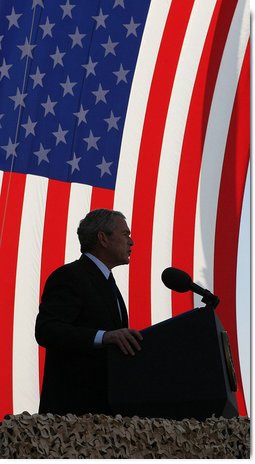 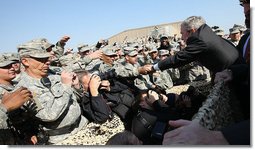