For Immediate Release
Office of the Press Secretary
January 8, 2008

PRESIDENT BUSH: It's been my honor to welcome the President of Turkey here. Mr. President, I'm glad you're here. This is not his first trip to Washington. I can remember many a time you sitting in the Oval Office as the Foreign Minister, and now you come representing the -- representing a great strategic partner as its President. 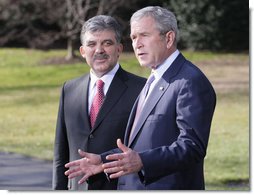 The United States, along with Turkey, are confronting these folks. And we will continue to confront them for the sake of peace. I strongly believe that Europe will benefit with Turkey as a member of the European Union. I have held this position ever since I've been the President; I feel it as strongly today as when I first articulated it. I think Turkey sets a fantastic example for nations around the world to see where it's possible to have a democracy coexist with a great religion like Islam. And that's important. I view Turkey as a bridge between Europe and the Islamic world, a constructive bridge. And so I believe it's in the interest of peace that Turkey be admitted into the EU.

We talked about energy and the need for all of us to help secure more energy supplies. We talked about -- I'm about to brief the President on my trip to the Middle East. I know he's deeply concerned about whether or not it's possible to achieve a two-state solution in the Middle East; I believe it is. And I'm looking forward to sharing the strategy.

All in all, we've had a very constructive conversation, and that's what you'd expect when you're -- when two friends are in the room together.

So Mr. President, thank you for coming, and welcome.

Our relations are important, and we will continue to work together to ensure that peace, stability and prosperity continue to grow around the world. And we are also working against our common enemy, the PKK, and we have once again underlined the importance of our cooperation in fighting against the PKK. And I would like to thank the President for his determination as well on this regard.

As the President has said, we have discussed some other important issues such as energy and the issues with respect to the Middle East. The President is engaged very much in efforts to ensure peace in the Middle East, and we believe that these are important efforts which can yield results.

We also discussed Iraq and we will continue to discuss issues such as Iraq, the Balkans and other issues. And I would like to thank the President for this meeting very much.