For Immediate Release
Office of the Press Secretary
January 4, 2008


I had quite a fascinating and productive meeting with the President's Working Group on Financial Markets, chaired by Secretary Paulson. I want to thank the members for working diligently to monitor our capital market system, our financial system. And while there is some uncertainty, the report is, is that the financial markets are strong and solid. And I want to thank you for being diligent. 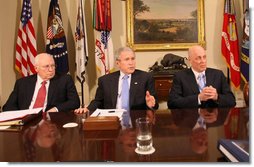 This economy of ours is on a solid foundation, but we can't take economic growth for granted. And there are signs that will cause us to be ever more diligent and to make sure that good policies come out of Washington. For example, we've had 52 straight months of job creation, but job growth slowed last month. The core inflation is low, but U.S. consumers are paying more for gasoline and for food. Consumer spending is strong, yet the values on many of the homes in America are beginning to decline, which leads me to say to the American people: For those of you who are paying more and are worried about your home, we understand that. That's why we have an aggressive policy to help credit-worthy people stay in their homes.

The Congress and the President have got to work together when they come back to, one, make sure taxes remain low. If there are -- if the foundation is strong, yet indicators are mixed, the worst thing the Congress could do is raise taxes on the American people and on American businesses. Secondly, we have got to understand that if we are worried about gasoline prices, we ought to expand refineries here in the United States, and we ought to explore for oil and gas in environmentally friendly ways in the United States. As I mentioned, the Secretary and Secretary Jackson are leading an initiative on housing, called HOPE NOW, but there's legislation that can be passed to make it easier for people to refinance their homes.

And so when Congress comes back, I look forward to working with them to deal with the economic realities of the moment, and to assure the American people that we will do everything we can to make sure we remain a prosperous country.