For Immediate Release
Office of the Press Secretary
December 27, 2007 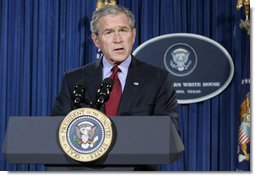 The United States strongly condemns this cowardly act by murderous extremists who are trying to undermine Pakistan's democracy. Those who committed this crime must be brought to justice. Mrs. Bhutto served her nation twice as Prime Minister and she knew that her return to Pakistan earlier this year put her life at risk. Yet she refused to allow assassins to dictate the course of her country.

We stand with the people of Pakistan in their struggle against the forces of terror and extremism. We urge them to honor Benazir Bhutto's memory by continuing with the democratic process for which she so bravely gave her life.