For Immediate Release
Office of the Press Secretary
December 26, 2007


Today, I signed into law H.R. 2764, legislation that will fund the Federal Government within the reasonable and responsible spending levels I proposed -- without raising taxes and without the most objectionable policy changes considered by the Congress. This law provides a down payment for the resources our troops need, without arbitrary timelines for withdrawal. The Congress should quickly take action next year to provide the remainder of the funding needed by our troops.

I am disappointed in the way the Congress compiled this legislation, including abandoning the goal I set early this year to reduce the number and cost of earmarks by half. Instead, the Congress dropped into the bill nearly 9,800 earmarks that total more than $10 billion. These projects are not funded through a merit-based process and provide a vehicle for wasteful Government spending. 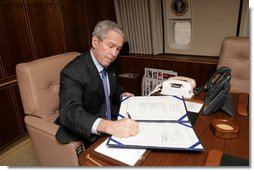 There is still more to be done to rein in Government spending. In February I will submit my budget proposal for fiscal year 2009, which will once again restrain spending, keep taxes low, and continue us on a path towards a balanced budget. I look forward to working with the Congress in the coming year to ensure taxpayer dollars are spent wisely.

Finally, this legislation contains certain provisions similar to those found in prior appropriations bills passed by the Congress that might be construed to be inconsistent with my Constitutional responsibilities. To avoid such potential infirmities, the executive branch will interpret and construe such provisions in the same manner as I have previously stated in regard to similar provisions.