For Immediate Release
Office of the Press Secretary
December 6, 2007

THE PRESIDENT: Good afternoon. Before turning to the situation in the housing market, I send my sympathy to the families of those murdered in Omaha, Nebraska, yesterday. I was in Omaha just before the shooting took place, and I know what a difficult day it is for that fine community. The victims and their loved ones are in the prayers of Americans. The federal government stands ready to help in any way we can. And our whole nation grieves with the people of Omaha. 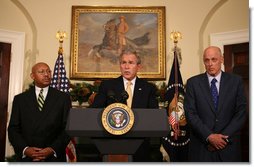 I just had an important discussion on the housing market with Secretary Paulson, Secretary Jackson and members of the mortgage industry.

The housing market is moving through a period of change. In recent years, innovative mortgage products have helped millions of Americans afford their own homes -- and that's good. Unfortunately, some of these products were used irresponsibly. Some lenders made loans that borrowers did not understand, especially in the sub-prime sector. Some borrowers took out loans they knew they could not afford. And to compound the problem, many mortgages are packaged into securities and sold to investors around the world. So when concerns about sub-prime loans begin to mount -- began to mount, uncertainty spread to the broader financial markets.

Secretary Paulson and Secretary Jackson and Chairman Bernanke are monitoring developments in the housing market, and working to limit the disruption to our overall economy. Data released this morning confirmed the difficulties facing the housing market. Yet one reason for confidence is that the downturn in housing comes against a backdrop of solid fundamentals in other areas -- including low inflation, a healthy job market, record-high exports. America's economy has proved itself highly resilient -- and it is strong, and it is flexible, and it is dynamic enough to weather this storm.

For individual homeowners, the problem is more difficult. Many of those feeling financial stress have an adjustable rate mortgage, which typically starts with a lower interest rate and then resets to a higher rate after a few years. Many of those borrowers cannot afford the higher payments. And now some are fearing foreclosure -- which is a terrible burden for hardworking families, and a source of concern for entire communities and neighborhoods across our country.

The rise in foreclosures would have negative consequences for our economy. Lenders and investors would face enormous losses. So they have an interest in supporting mortgage counseling and working with homeowners to prevent foreclosure.

The government has a role to play as well. We should not bail out lenders, real estate speculators, or those who made the reckless decision to buy a home they knew they could never afford. Yet there are some responsible homeowners who could avoid foreclosure with some assistance -- and in August, I announced a series of targeted actions to help them. My administration has moved forward in three key areas.

First, we've launched a new initiative at the Federal Housing Administration called "FHA Secure." This program gives the FHA greater flexibility to offset refinancing to homeowners -- to offer refinancing to homeowners who have good credit histories but cannot afford their current payments. In just three months, the FHA has helped more than 35,000 people refinance. And in the coming year, the FHA expects this program to help more than 300,000 families.

Second, in August, I asked Secretaries Paulson and Jackson to work with lenders and loan servicers and mortgage counselors and investors on an initiative to help struggling homeowners find a way to refinance. They assembled a private sector group called "HOPE NOW Alliance" -- their leaders are with us today. HOPE NOW is an example of government bringing together members of the private sector to voluntarily address a national challenge -- without taxpayer subsidies or without government mandates. I'm pleased to announce that our efforts have yielded a promising new source of relief for American homeowners.

Representatives of HOPE NOW just briefed me on their plan to help homeowners who will not be able to make the higher payments on their sub-prime loan once the interest rates goes up -- but who can at least afford the current, starter rate. HOPE NOW members have agreed on a set of industry-wide standards to provide relief to these borrowers in one of three ways: by refinancing an existing loan into a new private mortgage, by moving them into an FHA Secure loan, or by freezing their current interest rate for five years.

Lenders are already refinancing and modifying mortgages on a case-by-case basis. With this systematic approach, HOPE NOW will be able to help large groups of homeowners all at once. This will bring more relief to more homeowners more quickly. HOPE NOW estimates there are up to 1.2 million American homeowners who could be eligible for this assistance.

Public awareness is critical to this effort, because the group can only help homeowners who ask for it. So HOPE NOW recently mailed hundreds of thousands of letters to borrowers falling behind on their payments, and they have set up a counseling hotline that Americans can call 24 hours a day. I've directed Secretaries Paulson and Jackson to expand the public awareness campaign. And I have a message for every homeowner worried about rising mortgage payments: The best you can do for your family is to call 1-800-995-HOPE.* That is 1-800-995-H-O-P-E.*

Third, the federal government is taking several regulatory actions to make the mortgage industry more transparent, reliable and fair. Later this month, the Federal Reserve intends to announce stronger lending standards that will help protect borrowers. At the same time, HUD and the federal banking regulators are taking steps to improve disclosure requirements -- so that homeowners can be confident they are receiving complete, accurate and understandable information about their mortgages.

As we take these steps, the Department of Justice will continue to pursue wrongdoing in the banking and housing industries -- so we can help ensure that those who defraud American consumers face justice.

These measures will help many struggling homeowners -- and the United States Congress has the potential to help even more. Yet in the three months since I made my proposals, the Congress has not sent me a single bill to help homeowners. If members are serious about responding to the challenges in the housing market, they can start with the following steps.

First, Congress needs to pass legislation to modernize the FHA. In April 2006, I sent Congress an FHA modernization bill. This bill would increase access to FHA-insured loans by lowering down payment requirements, allowing the FHA to insure bigger mortgages in high-cost states, and expanding FHA's authority to price insurance fairly, with risk-based premiums. This bill could allow the FHA to reach an additional 250,000 families who could not otherwise qualify for prime-rate financing. Last year, the House passed the bill with more than 400 votes -- and this year, the House passed it again. Yet the Senate has not acted. The liquidity and stability that FHA provides the market are needed more than ever -- and I urge the United States Senate to move as quickly as possible on this important piece of legislation.

Second, Congress needs to temporarily reform the tax code to help homeowners refinance during this time of housing market stress. Under current law, if the value of your house declines and your bank forgives a portion of your mortgage, the tax code treats the amount forgiven as taxable income. When you're worried about making your payments, higher taxes are the last thing you need. The House agrees, and recently passed this relief with bipartisan support. Yet the Senate has not responded. This simple reform could help many American homeowners in an hour of need -- and the Senate should pass it as soon as possible.

Changing the tax code can also help state and local government do their part to help homeowners. Under current law, cities and states can issue tax-exempt bonds to finance new mortgages for first-time home buyers. My administration has proposed allowing cities and states to issue these tax-exempt mortgage bonds for an additional purpose: to refinance existing loans. This temporary measure would make it easier for state housing authorities to help troubled borrowers -- and Congress should approve it quickly.

Third, Congress needs to pass funding to support mortgage counseling. Non-profit groups like NeighborWorks provides essential service by helping homeowners find affordable mortgage solutions and prevent foreclosures. My budget requests nearly $120 million for NeighborWorks and another $50 million for HUD's mortgage counseling programs. Congress has had these requests since February, yet it has not sent me a bill -- and they need to get the funding to my desk.

Fourth, Congress needs to pass legislation to reform Government Sponsored Enterprises like Freddie Mac and Fannie Mae. These institutions provide liquidity in the mortgage market that benefits millions of homeowners, and it is vital they operate safely and operate soundly. So I've called on Congress to pass legislation that strengthens independent regulation of the GSEs -- and ensures they focus on their important housing mission. The GSE reform bill passed by the House earlier this year is a good start. But the Senate has not acted. And the United States Senate needs to pass this legislation soon.

The holidays are fast approaching and, unfortunately, this will be a time of anxiety for Americans worried about their mortgages and their homes. There's no perfect solution, but the homeowners deserve our help. And the steps I've outlined today are a sensible response to a serious challenge. I call on Congress to move forward quickly, and join me in delivering relief to homeowners in need -- so we can keep our economy healthy and the American Dream alive.