For Immediate Release
Office of the Press Secretary
November 29, 2007

I first want to congratulate the President on winning a distinguished honor with the IRI award. It's a recognition of strong leadership. The President deserves the award because he's been a strong leader, not only at home, but in the region. The Salvadoran economy is strong, in part because the President fought hard to have a free trade agreement called CAFTA. And a strong leader always worries about his people. 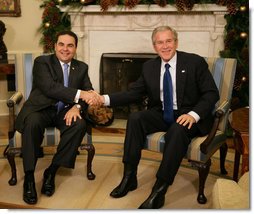 And so today the President wanted to know how his people in the United States are doing, how the people from his great country are doing here in the country. And I thank you for your compassion and your heart for your fellow citizens.

We share a concern about the drug issue and the crime issue. We're in the process of finalizing a strategy to help the Central American countries deal with these issues. And I've asked the President to take the lead, and he has been a strong regional leader, as well as a leader in his home country.

Y por fin, I want to thank the people of El Salvador for being such strong supporters in the war against extremists and radicals. I appreciate the sacrifice of your troops, Mr. President, and their families, as we work jointly to help others realize the blessings of liberty and freedom, particularly in Iraq.

PRESIDENT SACA: (As translated.) Thank you very much, Mr. President. We've had a very broad conversation with President Bush, our friend, our ally, historically in our struggle to build a democratic El Salvador. Twenty years ago we were in the midst of a war. Today we live in peace and democracy and economic growth.

We have discussed with President Bush about free trade and openness. I'm a true believer that free trade generates openness and opportunities for the low income people. President Bush was always a strong leader to push CAFTA through.

We have also spoken about the support that the United States has given us, especially on the security issue. The President has seen with good eyes the security, the regional security plan that we have prepared. And he has asked financial support to the Congress for this plan. The President is showing a great identification with Mexico and Central America, which is also important for the stability in the United States.

We have also spoken about the Millennium Account. El Salvador is on the right track. We're improving our indicators. We're investing in our people. We're improving public security. And El Salvador is one of the countries with the greatest level of freedom in all Latin America. Our country, although small, has an investment great. And this is very important because we have built this along 18 years of hard work, because no good results can come overnight. El Salvador is a society that is in its building, a democratic society, open -- in the midst of a Latin America that is filled up with populism today. To continue on this path is the most adequate thing we can do.

I want to express my appreciation to President Bush for his support to my fellow men with the TPS. We have 240,000 Salvadorans that have been benefited with the TPS, thanks to the direct support of President Bush. And today we have spoken of how important it is for my people to be legally living here in this country.

I have also invited him to visit El Salvador, and he has promised me to be there very soon. (Laughter.) So we're going to set up a date for that to be.

The United States has in Central America a region that is very stable after the democratic construction. We have spoken about all the important issues, such as the fight against drug activity; the FOL we have in El Salvador to fight drug trafficking that has allowed all the countries of Central America to capture large amounts of drugs. And Minister Figueroa, the Minister of Security, has talked to President Bush about the regional transnational center against gangs. El Salvador is working very well with the FBI, and with all Central America. There is no doubt that the regional plan is going to be a complete success.

I have reiterated to President Bush that we share a criteria on freedom, on democracy. And he is a very strong ally of El Salvador. It is important for El Salvador to remain democratic, making its people grow, without populism. And of course with great government responsibility. The United States has been our partner and our friend.

So thank you very much, Mr. President.