THE PRESIDENT: Good afternoon. Thanks for coming. I just finished briefings with Secretary Gates, Deputy Secretary England, Admiral Mullen, and the Joint Chiefs. We discussed the long-term needs of our military services and the importance of progressing with modernization.

The men and women of this department, the Department of Defense, are helping to carry out the government's most important duty: protecting the American people. Every day they confront America's enemies. Every day they work to stop the spread of dangerous weapons. And every day they guard against those seeking to bring another day of destruction to our shores. The missions of this department are essential to saving American lives. And they are too important to be disrupted, or delayed, or put at risk. 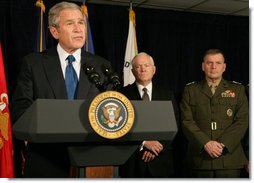 Beginning in February, I submitted detailed funding requests to the United States Congress to fund operations in the war on terror. Our military has waited on these funds for months. The funds include money to carry out combat operations against the enemy in Afghanistan and Iraq. They include money to train the Afghan and Iraqi Security Forces to take on more responsibility for the defense of their countries. They include money for intelligence operations to protect our troops on the battlefield.

Pentagon officials have warned Congress that the continued delay in funding our troops will soon begin to have a damaging impact on the operations of this department. The warning has been laid out for the United States Congress to hear. Recently Secretary Gates sought to clear up any misperception that the department can fund our troops for an indefinite period simply by shifting money around. In fact, Congress limits how much money can be moved from one account to the other. Secretary Gates has already notified Congress that he will transfer money from accounts used to fund other activities of the military services to pay for current operations in Iraq and Afghanistan

-- and no more money can be moved. So he has directed the Army and Marine Corps to develop a plan to lay off civilian employees, to terminate contracts, and to prepare our military bases across the country for reduced operations. These are contingency steps that a prudent manager must take.

Secretary Gates and America's senior military officials have made a reasoned case to Congress for the funds they need to keep the military running. They have carefully explained the need to plan prudently should those funds not be forthcoming. Secretary Gates puts it this way: "The Defense Department is like the world's biggest supertanker. It cannot turn on a dime and I cannot steer it like a skiff."

Here in Washington, leaders have a responsibility to send the right message to the rest of the world. Let us tell our enemies that America will do what it takes to defeat them. Let us tell Afghans and Iraqis that we will stand with them as they take the fight to our common enemies. Let us tell our men and women in uniform that we will give them what they need to succeed in their missions -- without strings and without delay.

I ask Congress to provide this essential funding to our troops before the members leave on their Christmas vacation. And I thank the members of this department for their hard work, their sacrifice, their courage, and their dedication to peace.