For Immediate Release
Office of the Press Secretary
November 22, 2007


The President made telephone calls this morning to exemplary members of the Armed Forces who are stationed in remote locations worldwide to wish them a Happy Thanksgiving and to thank them for their service to our Nation. 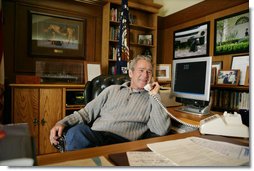 Sergeant Santos Alvarado, U.S. Marine Corps
Sergeant Santos Alvarado, U.S. Marine Corps, deployed to Fallujah, Iraq as a member of the 2nd Recon Battalion, Headquarters and Service Company, Supply Section, is responsible for maintaining the gear and equipment of the battalion's Marines. He is responsible for the proper accountability and management of the Battalion's budget. Sergeant Alvarado won the Meritorious Sergeant Board.

Staff Sergeant Neil Lockart, U.S. Air Force
Staff Sergeant Neil Lockart, U.S. Air Force, deployed to Balad Air Base, Iraq as a member of the 332nd Expeditionary Security Forces, is the leader of a team that protects USAF aircraft, personnel, and equipment. He was selected as Tuskegee Airman of the Week (week of October 29, 2007) and was recently recognized by General Petraeus for exemplary service.

Operational Specialist Second Class (OS2) Dustin Bingham, U.S. Coast Guard
OS2 Distin Bingham, U.S. Coast Guard, deployed to the Eastern Pacific on the USCGC Morgenthau (WHEC 722), is a senior member of the Morgenthau's CIC watch team and is currently filling the position of CIC watch supervisor. He is instrumental in the development of junior OS personnel and in the teaching and training fellow shipmates in Law Enforcement skills. OS2 Bingham has prosecuted eight successful cases against narcotics traffickers.