For Immediate Release
Office of the First Lady
November 19, 2007

MRS. BUSH: Good morning, everyone. How are you, Congressman? Good to see you. Good morning. Welcome to the White House; everyone is so glad you're here, very good to see you. This is one of the quietest crowds I've ever heard. (Laughter.) So let's -- we can get it a little bit more lively.

As you can see, Dolley Madison has already made her appearance, so we're going to get to hear from her in a minute. I want to recognize the Director of the U.S. Mint, Ed Moy. Ed, thank you so much for being here today. Michael Quinn, President of the Montpelier Foundation, with his wife Carolyn. And Chairman of the Montpelier Foundation, Joe Grills, and his wife, Marge. Carlynn Walker, the 5th grade student who will introduce Dolley Madison -- welcome to the White House. I want to also welcome Dolley Madison, herself, played by the actress Lucinda Frailly. Thank you for joining us. And of course, the members of Congress that have joined us here. Thank you all very, very much for coming. 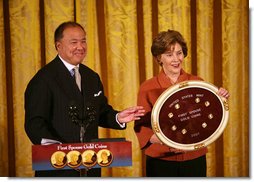 Lady Bird Johnson once said: "The Constitution of the United States does not mention the First Lady. One man elects her only." (Laughter.) "The statute books assign her no duties; and yet, when she gets the job, a podium is there if she cares to use it."

Since the first First Lady, each of our Presidents' wives has made unique contributions to our country. Abigail Adams was a trusted advisor to John in the early days of our Republic. Sarah Polk served as her husband's private secretary, clipping and summarizing political reports and news of the Mexican-American War. Edith Wilson managed Woodrow Wilson's presidency after he suffered a debilitating stroke. Eleanor Roosevelt represented the United States in the beginning days of the United Nations, and was a key author of the Universal Declaration of Human Rights.

By making their bouts with breast cancer public, Betty Ford and Nancy Reagan raised awareness of the disease, and gave women the knowledge and the courage to save their own lives. Lady Bird Johnson used her podium to champion environmental conservation. Every time we drive past beautiful landscapes along our nation's highways, we have Mrs. Johnson to thank.

America's first ladies have guided, comforted and sustained our nation in times of trial and triumph. At the same time, they've fulfilled their other very important role -- and that is the wife of the President of the United States. The East Room is the perfect place to honor these remarkable women, especially one of America's most beloved First Ladies: Dolley Madison. 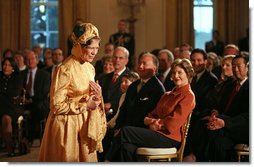 Even though Mrs. Madison's own life had been darkened by tragedy -- she lost her first husband and a son to yellow fever -- she was renowned for her joy, warmth, wit and charm. She delighted all her guests -- whether they were visitors from America's frontiers, or emissaries from the courts of Europe. Dolley's skills as hostess helped solidify our new nation's position as an independent, democratic power equal in sophistication to European monarchies.

Dolley's sparkling personality was the perfect balance to her shy husband's public manner. On a visit to the executive residence, Washington Irving wrote that Mrs. Madison is "a fine, portly, buxom dame," -- (laughter) -- "who has a smile and a pleasant word for everybody." President Madison didn't benefit from the comparison to his wife: "Ah, poor Jimmy!" Irving wrote of the father of our Constitution. "He is but a withered little apple-john." (Laughter.)

Mrs. Madison was a valuable political asset. At a time when Presidents were nominated or re-nominated by a party caucus in Congress, Dolley's popularity with legislators probably earned her husband his second term. She commanded so much respect that she even had the power to stop duels -- a popular method for settling political disputes back then -- and we thought the political climate was rough today. (Laughter.) When it came to making allies out of members of Congress, Dolley went above and beyond the call of duty -- even sharing a snuff box with Henry Clay.

Mrs. Madison also set the tone for our new nation with her impeccable taste and style. Previous First Families had decorated their new residence in Washington with personal furnishings brought with them from Massachusetts and Virginia. James Madison tasked Dolley with re-creating the White House as the official home for America -- a duty that would shape the public's image of his presidency, and our nation.

Mrs. Madison enlisted the help of famed architect Benjamin Henry Latrobe, and secured from Congress initial funding of $5,000. According to accounts from the time, Latrobe and Mrs. Madison spent their redecorating budget so fast "it made heads spin."

That's not to say that they agreed on everything: When Mrs. Madison insisted on rich, red velvet draperies for what is now the Blue Room -- then decorated in muted cream, blue and gray - Latrobe was horrified. "The curtains!" Latrobe lamented, "Oh, the terrible velvet curtains! Their effect will ruin me entirely, so brilliant will they be!" Eventually, Latrobe dropped the complaint after rave reviews from visitors proved Mrs. Madison right.

Those red curtains were one of the things Mrs. Madison made sure to save when the British invaded Washington and torched the executive mansion during the War of 1812. In a few minutes, we'll hear more about Mrs. Madison's heroism -- and the famous story of how she rescued her beloved Gilbert Stuart portrait of George Washington, which of course is still here today in the East Room. This portrait was only 14 years old when she saved it, so it was a new, modern portrait.

Mrs. Madison's bravery in the face of British troops earned her the love and respect of her fellow citizens -- and a permanent place in American history. At the end of her career in our nation's capital, Daniel Webster wrote that Dolley Madison is "the only permanent power in Washington -- all others are transient." (Laughter.)

Today, we're paying tribute to an amazing First Lady, and an extraordinary woman, with the Dolley Madison Gold Coin. Over the last year, since the U.S. Mint launched the First Ladies series, these coins have been extremely popular: The likenesses of Martha Washington, Abigail Adams, and Jefferson's Lady Liberty sold out within hours of their release. Their appeal reflects the enthusiasm of America's coin collectors, the public's fascination with American history, and Americans' interest in our remarkable First Ladies. Thanks to each of you for your work to make this coin possible, and for recognizing the women who've contributed so much to our country.

Now, to tell you more about the program, I'd like to introduce the Director of the United States Mint, Ed Moy.

MRS. BUSH: Thank you so much, Ed. Thank you very much. Well, I want to invite everyone to the dining room for coffee, but on the way I want to encourage you to go through the newly refurbished Green Room and the Blue Room, with the Monroe furniture. And the Red Room with Angelica Van Buren's painting above the fireplace; she was the hostess for President Van Buren, as Dolley told us. And in that beautiful portrait is the bust of President Van Buren, which then you'll also see -- the real bust on the pediment above the secretary in that room. I believe in that room there is also the portrait of Dolley Madison.

So I invite you to join us for coffee, to look at all these beautiful rooms, the drawing rooms that Dolley Madison used, and then to stay around and watch the President leave on his helicopter at 9:45 a.m. Thanks everybody. (Applause.)