For Immediate Release
Office of the Press Secretary
November 16, 2007

PRESIDENT BUSH: Mr. Prime Minister, welcome to the White House. I really appreciate the opportunity to get to know you better. I'm looking forward to our lunch.

This is an important visit. It's the first visit the Prime Minister has taken since he has assumed his important office. It's a recognition that our alliance is vital for peace and security. The alliance between our two countries is rooted deeply in our strong commitments to freedom and democracy. The Prime Minister and I are going to keep it that way. One of the things we've decided to do is to continue to make sure the U.S.-Japanese relationship is the cornerstone of security and peace. And I appreciate you being here. 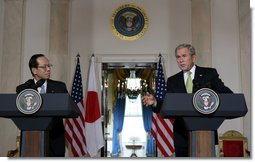 We'll continue to work together to advance freedom, security and prosperity in our respective regions and beyond. We discussed a lot of ways that we can make the world a better place by working together. We discussed North Korea and the six-party talks. I appreciate Japan's participation in the six-party talks. Together with China, Russia and South Korea, our two nations are pressing North Korea to fulfill its obligation to abandon all its nuclear weapons programs, as well as its proliferation efforts. The six-party talks have delivered measurable results. The plutonium production facilities at Yongbyon are now being disabled, under six-party supervision.

Hard work still remains to be done. North Korea has agreed to provide a full declaration of all its nuclear programs and proliferation activities by the end of this year. Full declaration is one of the next steps North Korea must take to keep the six-party talks moving towards the goal of a Korean Peninsula without nuclear weapons.

We also discussed the issue of Japanese citizens abducted by North Korea. I reminded the Prime Minister of one of the most moving moments of my presidency, when the mother of a young girl who had been abducted by the North Koreans came to visit me. I told her, and I'm going to tell the Japanese people once again, we will not forget this issue.

I understand, Mr. Prime Minister, how important the issue is to the Japanese people, and we will not forget the Japanese abductees, nor their families.

Mr. Prime Minister, I appreciate the great leadership that you are showing as you work to reauthorize the Japanese refueling mission. Japanese air defense -- Self-Defense Forces continue to serve bravely to support coalition efforts in Iraq. Japanese planes have flown more than 600 sorties, carrying more than half a million tons of cargo from many nations. And, Mr. Prime Minister, like I told you in the Oval Office, I appreciate the contribution that the Japanese people are making to help this young democracy. 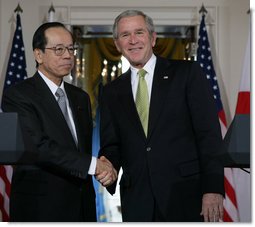 We discussed the realignment of our military forces, and we'll continue to do so with Secretary Gates over lunch. Our two nations continue to implement changes in our force posture that will help our alliance meet the challenges of the 21st century.

We discussed Iran. The Prime Minister and I agree that a nuclear-armed Iran would threaten the security of the Middle East and beyond. Our two nations are united in our efforts to change the regime's behavior through diplomacy. We agreed that unless Iran commits to suspend enrichment, international pressure must, and will, grow.

We discussed Burma. The Prime Minister and I condemned the regime's crackdown on democratic activists. We call for the release of Aung San Suu Kyi and all other political prisoners. We're for a genuine dialogue between the regime and those who seek a democratic future for Burma. U.S. sanctions on the regime are in place. Japan has canceled an aid grant. The Prime Minister told me his government is reviewing other aid projects to ensure that they directly benefit the people of Burma.

We discussed our strong economic relationship. Prime Minister Fukuda and I discussed his plans for economic reform in Japan. We discussed Doha, and will continue our discussions over lunch.

I think we're going to serve the Prime Minister -- I hope we serve him some good U.S. beef, which is a good way to bring up the subject of beef. We hope we're able to have the Japanese market fully open to all U.S. beef and beef products, consistent with international guidelines.

And finally, we discussed the G8, and I want to thank you for taking the lead in the G8. I'm looking forward to attending.

All in all, we had a great discussion that will be continued during lunch. Mr. Prime Minister, welcome to the United States, and I thank you for your friendship. 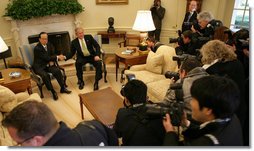 PRIME MINISTER FUKUDA: (As translated.) Well, on this first overseas trip after taking office, I have come to this one and only ally for Japan, the United States of America. And I had a very substantive meeting with President Bush just now. And I look forward to a further exchange of views with the President after this. But since this is a very good opportunity, I would like to express some of my views on the basis of the discussions we had earlier.

First of all, we agreed that Japan-U.S. alliance is playing an indispensable role in enabling Japan and the United States to address global issues together, and also provides the basis for our active diplomacy vis-a-vis Asia.

For over half a century Japan and the United States at times have overcome difficulties together and have built a solid and resilient alliance. And we today enjoy this relationship, thanks to the efforts made by countless people in our two countries and exchanges among them.

To further cement the foundation for our bilateral relations in the future, without taking for granted our current solid relations, I explained to the President my initiative to strengthen Japan-U.S. exchanges, including intellectual exchanges. And I received heartfelt support for this idea from President Bush.

Following this meeting here, I shall be attending a series of ASEAN-related summit meetings in Singapore, and I desired to visit Washington, D.C. and have discussions with President Bush because of my belief regarding our alliance. And I'm extremely encouraged by the President's support.

We also discussed issues that Japan and U.S. need to address jointly, and particularly -- in particular, North Korea and the fight against terrorism. With regard to North Korean nuclear programs, we agreed that Japan and U.S. need to maintain close coordination with each other, in order to achieve complete abandonment of all nuclear weapons and programs by North Korea, through the six-party talks. President Bush stated that he will never forget the abduction issue, and on that basis he once again expressed his commitment for unchanged support to the Japanese government.

We should never allow Afghanistan to once again become a hotbed for terrorism. And we agreed that Japan and the United States should continue to work together with the international community in the fight against terrorism. And I communicated to President Bush that I shall do my level best to achieve an early passage of a bill for the early resumption of the refuel act of -- (inaudible) -- in the Indian Ocean by the Japanese Maritime Self-Defense Force. President Bush expressed his appreciation for Japan's support for the international community's fight against terrorism and the hope that refueling operations will be resumed soon.

With regard to Myanmar, I stated that I have been working on the government of Myanmar for democratization and improvement of the human rights situation. And with regard to Iranian nuclear development, we cannot -- never tolerate and we agreed that we shall together work to raise pressure with the international community so that Iran will comply with the relevant U.N. Security Council resolutions.

And in this age of rapid changes, on the basis of Japan-U.S. alliance, Japan intends to exercise more active leadership in addressing the problems of Asia and international community.

And further, we shall have discussion with President Bush over lunch on new, important issues. Japan shall be hosting two important national conferences next year. One is the G8 summit at Lake Toya in Hokkaido, in July. And the important theme for that meeting will be climate change. On this issue, Japan and the United States, through close coordination over the past half year or so, have led international discussions. And through a new forum for negotiations at the U.N., we very much hope that we will have discussions with President on closer cooperation on global warming measures so that concrete results will be achieved for an effective framework for the future.

And through further coordination, we would like to achieve a successful G8 summit on the global climate change issue and other matters, as well, because I believe that we can have useful discussions that will allow science and technology to achieve continued economic growth, and also achieve global warming measures and energy security.

The other important conference Japan will be hosting is the International Conference in African Development, because that is a matter that the international community together should address. And this is the -- (inaudible) -- fourth Tokyo International Conference on African Development that will be held in Japan in May. And we would like to tie the findings and results of that meeting to the G8 summit. And again, we'd like to engage in cooperation with the United States. And there also is a question of health care in Africa, and again we would like to work in cooperation with the United States on that health care issue.

As the world economy faces numerous challenges, Japan and the United States, I believe, should work together on a global scale in the economic area, including intellectual property protection and for the sustainable development of developing countries.

There was a reference to beef. I hope that -- well, we are addressing the beef issue on the basis of scientific findings. We are still in the process of our bilateral meetings.

I wanted to take this opportunity to express my appreciation for the very warm welcome by President Bush and the people of the United States. And I look forward to addressing our common challenges together, hand in hand with President Bush.