For Immediate Release
Office of the First Lady
November 16, 2007

MRS. BUSH: Thank you so much. Thank you especially for Gilder-Lehrman's support of the Preserve America History Teacher of the Year program -- with special thanks to you, Dick Gilder, thank you very much for all the many, many things you've done besides this even to promote the study and the knowledge and the research of American history. Thank you for that.

I also want to recognize Susan Barnes, who is the Vice Chairman of the Advisory Council on Historic Preservation. Thank you, Susan, for being here with us. And Susan Henshaw Jones, the President and Director of the Museum of the City of New York. And especially all the excellent history teachers who are here with us today, and all these excellent history students. Thank you very much for joining us. 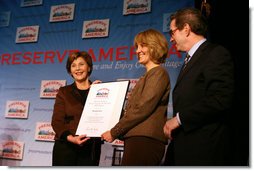 The renowned historian, David McCullough, once wrote, "History is who we are, and why we are the way we are." Great history teachers make America's past a thrilling personal experience for their students. Great teachers encourage students to discover our country's heritage through artifacts and primary sources. The personal letters of generals, presidents, and pioneers educate young people about the concerns of their ancestors. Photographs of soldiers on a Civil War battlefield -- or of students asserting their equality at a soda shop counter ---illustrate the sacrifices past generations made to advance our national ideals of justice and freedom.

Today, we're honoring one educator who's done an exceptional job of making history thrilling for her students: Maureen Festi, the 2007 Preserve America National History Teacher of the Year. (Applause.)

Ms. Festi has taught for 30 years, but she's known she wanted to be a teacher since she was a little girl. Maureen grew up on a Connecticut farm with lots of siblings and cousins -- who she gathered into a class so she could play school. She took that as a sign that she was meant to be a teacher.

History has always been Maureen's favorite subject -- even though she remembers her own history classes as dry exercises in memorization. When Ms. Festi became a member of the American History Project at EASTCONN, though, she realized history didn't have to be boring. She met with archivists and museum directors, she went on field trips, and she discovered the thrill of working with primary documents.

The workshop turned Ms. Festi's interest in history into an obsession -- and she was determined to share it with her students. She began investigating the history of her hometown of Stafford. At the Connecticut Historical Society, Maureen found a single piece of paper that was a summons for a town meeting to discuss how Stafford would meet its quota of soldiers for the Revolutionary War. "I'm actually touching history," Ms. Festi thought in amazement. "I've got to find a way to do that with my kids." 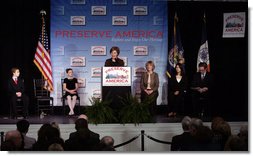 Maureen found hundreds of ways to make history a hands-on experience for her kids. She brought them to the Connecticut Historical Society so they could review the same primary documents. Stafford was the center of America's early iron industry, which was vital to the success of colonial settlements. Maureen wanted her students to appreciate her town's rich past, and its connection to American history.

She traveled to national historical sites and she spent hours with park rangers to learn about the colonial iron-making process. Ms. Festi spent months researching primary sources at local libraries and historical societies. She took photographs of Stafford's historical sites to use in her classroom, and she interviewed longtime residents to collect their stories and the stories of their ancestors.

Maureen turned her research into an integrated lesson plan. The kids learned about science as they studied iron ore and blast furnaces. They honed their reading skills by deciphering 18th-century land records -- and they improved their writing as they drafted plays, poems, and journals inspired by historical figures. The Iron Works unit even covered art: Students researched colonial crafts, and then they made everything from clay pots to model wooden cabinets. One day, a student came up to Ms. Festi and said, "Ms. Festi, let me get this straight: We're basically doing social studies all day long." (Laughter.)

Another student explains, "Ms. Festi took the subject and made it so we could connect to it. She made it fun to learn." She used everything from hand-made puppets to streaming video technology to get students excited about the past. On real and virtual field trips, Maureen's students observed re-enactments of the colonial iron-making process, and they visited the places where Stafford iron was used in the Revolutionary War.

When they finished their research, Ms. Festi encouraged students to use their talents and their interests to present their findings to the class. One student choreographed an interpretive dance. Two girls performed a play as colonial housewives. A group of boys wrote a musical, which they performed in full colonial costume.

Ms. Festi taught her kids to look for the history around them. They explored Stafford's historical sites, and they searched the town for relics of Stafford's early iron industry. Ms. Festi was amazed when one student -- Stafford's "video game king" -- put down his controllers and excavated his own back yard. (Laughter.) Even more amazing, his parents never called her to complain. (Laughter.)

Ms. Festi's principal, David Bartlett, describes her as a "totally dedicated" teacher. "Teaching is her life," he said. Maureen is the first elementary-school teacher to be named a Preserve America History Teacher of the Year. And because Ms. Festi has her students all day, her commitment to excellent history teaching influences every other subject. Every year, her classes show significant progress in literacy and numeracy. On average, her students gain 12 points on reading comprehension tests. As fourth graders, 74 percent of Maureen's class last year achieved the writing goal on the Connecticut Mastery Test. After their time with Ms. Festi, the same goal was met by every single student.

Thank you, Maureen, for your enthusiasm, your professionalism, and your dedication to your students. We know they're proud of you: When Ms. Festi's class heard that she was receiving this award, one 10-year-old student said, "We're such a small town, and now everyone will know we have really good teachers here. We have a reputation!" (Laughter.) Congratulations to everyone here from Stafford on your great history teacher -- and congratulations to Maureen. (Applause.)

Now, to tell you more about Ms. Festi, I'd like to introduce two of her former students at Stafford's Witt Intermediate School: Morgan Bagley and Tyler Whaley.