For Immediate Release
Office of the Press Secretary
November 15, 2007

THE PRESIDENT: Thanksgiving is a week from today, and Christmas will quickly follow. This is really a time of joy for our families. Unfortunately, this is also a season of dread for too many Americans. Holiday travelers faced with the prospect of long delayed and cancelled flights and lost baggage, and other problems have become all too often an occurrence. In other words, there's a lot of people that are worried about traveling because they've had unpleasant experiences when they've been flying around the country. 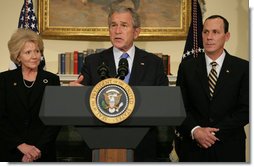 And so this is a topic that I've just discussed with Secretary of Transportation Mary Peters and the Acting Administrator of the FAA, Bobby Sturgell. It's one thing to analyze the problem, but the American people expect us to come up with some solutions. And that's what we've been talking about. And one of the reasons we have a sense of urgency about this issue is that these problems that we've been discussing are clear to anybody who has been traveling. Airports are very crowded, travelers are being stranded, and flights are delayed, sometimes with a full load of passengers sitting on the runway for hours. These failures are -- carry some real costs for the country -- not just in the inconvenience they cause, but in the business they obstruct and family gatherings they cause people to miss.

We can do better. We can have an aviation system that is improved. And that's what we're talking about. Secretary Peters and Acting Administrator Sturgell have been working with the airline industry on practical improvements. I want to announce a series of preliminary actions to help address the epidemic of aviation delays:

First, the military will make available some of its airspace over the East Coast for use by civilian airliners this Thanksgiving. These new routes will help relieve air congestion from Maine to Florida for nearly five full days surrounding the holiday.

Second, the FAA is taking new measures to head off delays. Bobby Sturgell will impose a holiday moratorium on all non-essential projects, so that the FAA can focus its personnel and equipment exclusively on keeping flights on time. The FAA is also partnering with the Port Authority of New York and New Jersey to reduce bottlenecks in the New York metro area, which is the source of most chronic delays.

Third, the Department of Transportation and the FAA are encouraging airlines to take their own measures to prevent delays. I'm pleased to get the report from Secretary Peters and Acting Administrator Sturgell. Airlines have agreed to make more staff available to expedite check-in and boarding, to set aside extra seats and even extra planes, to help accommodate passengers affected by cancellations and delays. They agreed to bring in additional ticket kiosks and baggage handling gear, as well as rolling staircases.

Fourth, the federal government is using the Internet to provide real-time updates on flight delays. People in America have got to know there's a website called Fly.FAA.Gov; that's where the FAA transmits information on airport backups directly to passengers and their families. If you're interested in making sure that your plans can -- aren't going to be disrupted, you can get on the website of Fly.FAA.Gov. As well, if you want to, you can sign up to receive delay notices on your mobile phones. In other words, part of making sure people are not inconvenienced is there to be -- get transmission of sound, real-time information.

Fifth, we're proposing new regulations to help ensure that airline passengers are treated fairly. We're proposing to double the amount of compensation passengers receive when they're forced off over-booked flights. For example, a passenger forced to wait more than two hours for another flight would receive a minimum of $800 under our idea -- instead of the current $400. We want people who are responsible for moving passengers to understand that there will be consequences for these delays -- all aiming to get the system to work better.

We're proposing a requirement that airlines collect better data on flight delays -- and provide that data to the Department of Transportation. We're evaluating a number of other recommendations for the airlines, including mandatory contingency plans to aid stranded passengers and penalties for chronically delayed flights.

Finally, the Department of Transportation and the FAA are working on innovative ways to reduce congestion in the long run. While short-term improvements in flight operation and passenger treatment can help, they do not cure the underlying problem: In certain parts of our country, the demand for air service exceeds the available supply. As a result, airlines are scheduling more arrivals and departures than airports can possibly handle. And passengers are paying the price in backups and delays.

The key to solving this problem is managing the demand for flights at overloaded airports -- and there are a variety of tools to do this in a fair and efficient way. For example, fees could be higher at peak hours and at crowded airports, or takeoff and landing rights could be auctioned to the highest-value flights. Market-based incentives like these would encourage airlines to spread out their flights more evenly during the day, to make better use of neighboring airports, and to move the maximum number of passengers as quickly and efficiently as possible.

This concept is called "congestion pricing." It has shown results in other areas of our economy -- in other words, other parts of our economy use congestion pricing. Some states offer discounts to drivers who use EZ-Pass, which reduces long waits at the toll plaza. Phone and electricity companies balance supply and demand by adjusting their rates during peak usage hours. Applying congestion pricing to the aviation industry has the potential to make today's system more predictable, more reliable, and more convenient for the travelers. Over the past seven weeks, federal officials have raised this idea with airlines and airport representatives in the New York area. I've asked Secretary Peters and Acting Administrator Sturgell to report back to me about those discussions next month.

My administration will work swiftly to carry out the measures I've announced today. But to reform our aviation system in a way American consumers deserve, we need action from the United States Congress. In February, my administration sent Congress an FAA modernization bill that would improve the aviation system for all involved. The bill would upgrade aviation technology -- by adopting a safer and more automated air travel [sic] control system based on GPS technology, instead of the radar and radio-based systems designed during World War II.

If we really want to solve this problem, it's time for Congress to modernize the FAA, and we've given them a blueprint to do so. The bill would employ market pricing to reduce congestion and ensure that airports manage their schedules efficiently. The bill would establish a new financing mechanism and governing structure to ensure that these reforms are carried out in wise and cost-effective ways.

There are people in Congress who understand the need to act, starting with Senators Trent Lott and Senator Jay Rockefeller. They're leaders in this area of modernization of our -- of the FAA. They understand that business as usual is not good enough for American travelers. And so do I, and so does my administration.

I look forward to working with them to get a good bill passed as soon as possible. By working together, we can restore the confidence of America's consumers, improve the efficiency of America's airports, and bring order to America's skies.