For Immediate Release
Office of the Press Secretary
November 14, 2007

THE PRESIDENT: Thank you all very much. Good morning. I'm pleased to be back here at the Department of Justice, and to join you for the swearing-in of Judge Michael Mukasey as the 81st Attorney General of the United States. We welcome Michael's wife, Susan, their children, Marc and Jessica, their son-in-law Corey, their grandchildren, William and Benjamin, and other members of the Mukasey family. We share their pride in Michael on this important day. And I appreciate you all coming to witness it. 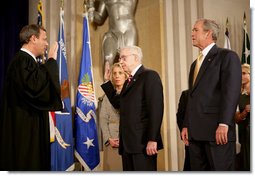 I particularly want to thank the Chief Justice of the United States, John Roberts, who is here to swear-in the General. I want to thank members of my Cabinet who have taken time off to come and welcome a new Cabinet member. I appreciate very much that Senator Arlen Specter of Pennsylvania, the Ranking Member on the Senate Judiciary Committee, has joined us, along with Sam Brownback and Senator Lindsey Graham. Thank you all for coming. And thank you for making sure this good man not only made it to the floor of the Senate, but was confirmed.

The job of the Attorney General is one of the most important in our nation's government. The Attorney General must run the world's largest law firm, and the central agency for enforcement of our federal laws. He must aggressively prosecute gun criminals and drug dealers, hold corporate wrongdoers to account, protect victims of child abuse and domestic violence, and uphold the civil rights of every American.

In this time of war, the job of the Attorney General is also vital to America's national security. The Attorney General is responsible for our law enforcement community's efforts to detect, prevent, and disrupt terrorist attacks here at home. He must make certain that our intelligence and law enforcement communities work hand-in-hand to protect the American people from terrorist threats. He must ensure that we do everything within the law to defend the security of all Americans -- while at the same time protecting the liberty of all Americans.

Judge Michael Mukasey is the right man to take on these vital challenges. Michael understands the law from both sides of the bench. He served for more than 18 years as a U.S. District Court Judge in New York, including six years as the Chief Judge. He was a lawyer in private practice. He has served an Assistant United States Attorney in Manhattan, where he headed the Official Corruption Unit.

Judge Mukasey also understands the challenges facing our nation in this time of war. He has written wisely on matters of constitutional law and national security. He knows what it takes to fight the war on terror effectively. And he knows how to do it in a matter that is consistent with our laws and our Constitution. He will bring clear purpose and resolve to the job of Attorney General. I look forward to working with him as a member of my Cabinet, and a key player on our national security team.

Our new Attorney General -- as our new Attorney General, Michael Mukasey follows in the footsteps of a fine man and a fine American -- Al Gonzales. I have known Al since our days working together in the State of Texas. As White House Counsel and as Attorney General in my administration, Al Gonzales worked tirelessly to make this country safer and to ensure that all Americans received equal justice before the law. Over many years, I have witnessed his integrity, his decency, and his deep dedication to the cause of justice. I am grateful for his friendship. I thank him for his service to our nation. And Laura and I wish him, and his wife Becky, and their children, Jared, Graham, and Gabe, all the very best. (Applause.)

I also thank Peter Keisler, who has served as Acting Attorney General during Judge Mukasey's confirmation process. Peter delayed his plans to leave the Justice Department in order to ensure that the Department had strong leadership during these past months. I appreciate the job you've done. With his departure, many of the most senior positions at the Department of Justice will now be vacant. In a time of war, it's vital that these positions be filled quickly. So in consultation with the Attorney General, I will announce tomorrow my nominations for several of these senior leadership positions. And I look forward to working with the Senate to fill these important positions at the Justice Department, so that America has the strongest, most capable national security team in place.

As he embarks on his new responsibilities, Michael Mukasey has my complete trust and confidence. (Applause.) And he's going to have the trust and confidence of the men and women of the Department of Justice. (Applause.) The people here are good people, hardworking Americans. From the headquarters, to U.S. Attorneys' offices, to remote posts overseas, these fine Americans, Judge, are working to keep the American people safe. They work everyday to fulfill the most important function of the federal government, and that's to protect the American people from harm. Their efforts are essential to the security of America. The people who work for justice deserve the very best leadership, and you're going to have it with Judge Michael Mukasey. (Applause.)

You'll find out what I found out: Judge Mukasey is a decent man, an outstanding lawyer, and a strong leader, and I am really looking forward to his wise counsel in the months ahead. Judge, I want to thank you for agreeing to serve our country once again, and congratulations.

And now I ask Chief Justice John Roberts to administer the oath of office. (Applause.)

ATTORNEY GENERAL MUKASEY: President Bush, Chief Justice Roberts, fellow members of the Cabinet, members of Congress in attendance here today, former attorneys general, family and friends, and my colleagues of the United States Department of Justice. The program for this ceremony reports that after I was confirmed on November 8, 2007, I entered on duty the following day, November 9th. And in a sense, I did. I came to the Justice Department building on that day and took the oath before a small group, including my family and some of the talented people who work on the fifth floor, and became authorized, technically, to perform the duties of the office.

But let there be no mistake about it: In my mind and my heart, I was in no meaningful sense the Attorney General until I took the oath a moment ago, here, in this building, before you who are physically here and before you who serve in divisions and units and field offices of this great department throughout this country and around the world.

I've said previously that much has changed since 1972, when I took the same oath I took today to serve the United States Attorneys Office, and indeed it has. There are laws on the books today that did not exist when I was sworn in then, and there are problems that confront us now that did not confront us then; mainly, but not entirely, involving the threat to our security from those who believe it is their religious duty to make war on us.

But the oath, of course, has stayed the same; and so, in many ways, has the nature of the work -- the work that I did then and that you have been doing before I arrived here. You are, all of you, involved day to day in applying regulations or rules or laws or provisions of the Constitution you have all sworn to protect, a sworn promise in which I joined this morning.

What each person here does on a day-to-day basis is law. If that sounds prosaic and rather limited, try thinking for a moment about the alternative, with a result -- where the result depends on the opinion of one person or a group of people as to what they feel is right. We don't simply do what seems fair and right according to our own tastes and standards.

But when you step back and look at the thousands of decisions that are made every day under those rules and regulations and laws and constitutional provisions that this Department enforces, the cases you handle, the prisoners in your care, the investigations you pursue; when you look at that, the result is something glorious. The result is what gives this Department its name. We do law, but the result is justice. And that is why our ultimate client, the people of this country, can and do rest secure in the knowledge that our unswerving allegiance is to the law and the Constitution, and that the result of faithful performance of our duty is justice.

That is the great work that each of you and all of you were doing before I showed up here this morning, and took the same oath that you have already taken. But the reason why I believe that I was not in any meaningful sense the Attorney General until I came before you here, is that my job involves not only an oath, but also a pledge, which I now give you. And that is to use all of the strength of mind and body that I have to help you to continue to protect the freedom and the security of the people of this country and their civil rights and liberties through the neutral and even-handed application of the Constitution and the laws enacted under it.

So I ask myself in every decision that I make, whether it helps you to do that, to take the counsel not only of my own insights but also of yours, and to pray that I can help give you the leadership that you deserve.

I thank you for welcoming me. It's great to be back. (Applause.)