For Immediate Release
Office of the Vice President
November 11, 2007

THE VICE PRESIDENT: Thank you. Thank you very much, Secretary Mansfield. And I appreciate the welcome and the introduction. Let me also thank General Rowe; Jack Ryan, the National Commandant of the Marine Corps League; and the fine musicians of the U.S. Army Band for their outstanding performance this morning. 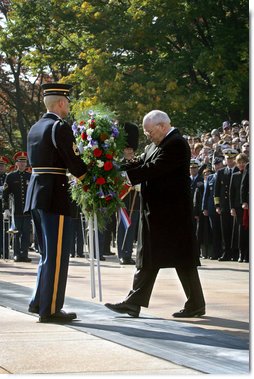 Above all, I want to recognize all the active duty service members who have joined us, as well as the veterans who've come from across America. It's a privilege to be in your company today on Veterans Day, and a privilege, as well, to extend personal regards from the Commander-in-Chief, President George W. Bush. (Applause.)

I also want to acknowledge a group of soldiers who are nearby today, and who will remain once this ceremony is over. Indeed they'll be here when the sun goes down and the gates of the cemetery are closed. The Third U.S. Infantry Regiment provides the honor guard for the Tomb of the Unknowns. Also called the Old Guard, the Third Infantry is on watch here 24 hours a day, 365 days a year, regardless of the weather. And they meet the same standards of precision and polish in the deep of night as they do at high noon. On behalf of all of us, I thank the members of the Old Guard for upholding a proud American tradition with the greatest of skill and the utmost dignity. (Applause.)

A solemn ritual is observed at the Tomb of the Unknowns, and all the graves here are carefully tended, because this is hallowed ground. Resting at Arlington are heroes who fell in battle, from the war for independence to the current fight against terrorism. Also resting among these hills are many Americans who wore the uniform -- and then, as veterans and retired service members, continued lives of purpose and achievement. Here is buried General George C. Marshall, who as Secretary of State drew up a plan for European recovery that yielded generations of peace. Another is Oliver Wendell Holmes, Jr., a Brevet Colonel who was shot three times in the Civil War -- and seven decades later was sitting on the Supreme Court of the United States. We have General Omar Bradley, the last of the five-stars, who lived 88 years. We have astronauts and Cabinet members, and President John F. Kennedy, who survived his time in war, yet nonetheless, while still a young man, gave his life in service to the United States of America.

Under a marker not far from here lies an old friend of mine, Joe Foss -- Medal of Honor, World War Two. As a Marine Corps aviator, Joe personally shot down 26 enemy aircraft. He had more guts and more bragging rights than just about any man I've ever known. But if you talked to him about his time in the service he was likely to mention his buddies who lost their lives. More than 50 years after the fact he would say their names, and say how much he regretted that they never made it home. Joe Foss lived to age 87, and he often said, "Those of us who lived have to represent those of us who didn't make it." His words express a feeling that is common to Americans who have worn the uniform. They never forget their friends -- especially the ones who didn't live to be called veterans. 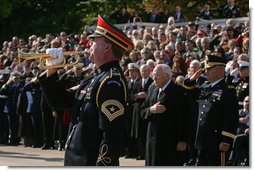 Nor do veterans ever seem to lose the desire to serve their country. Anywhere you go in America, you find that veterans are the backbone of their communities -- always making a contribution, pitching in, providing leadership, and setting a good example for the young.

Some of our veterans are pretty young themselves, and have recent memories of the cold mountains of Afghanistan, or the burning heat of Iraq. Others go back to the Persian Gulf War, to Vietnam, Korea, or the standoff of great powers we still call the Cold War. Still with us are many members of the largest American force ever fielded, who defeated militarism in the Pacific and Hitler's army in Europe. Even now we marvel at the incredible achievements of that World War Two generation. And we still have among us today Americans who were serving on the original Armistice Day, November 11th, 1918. America's World War One veterans are now just a handful in number, but we're thinking of them today, and they are very special in the hearts of this nation.

More than 20 million of our fellow citizens bear the distinction of veteran. Each has his or her own story. But whether duty found them at home or abroad, in wartime or peacetime, they all share the pride of having served. And they have in common the memory of taking an oath and becoming part of something much larger than themselves. President Dwight Eisenhower described the moment this way. He said that when he raised his right hand and repeated the official oath, "A feeling came over me that the expression 'The United States of America' would now and henceforth mean something different than it ever had before. From here on it would be the nation I would be serving, not myself."

America may be a country founded in revolution, but we've never been a warrior culture. We are a democracy, defended by volunteers. We're a peaceful nation, with friends to the north and the south of us, and great oceans to the east and the west of us. Yet these blessings alone have never been enough to assure safety at home or peace in our world. At times in our history, arms and ideologies have been massed against us, and we have heard the call to bring freedom, new hope, and healing to afflicted peoples.

America has faced these challenges, often at very high cost. We see part of that cost right here on the hills of Arlington. And the legacy of the American armed forces is truly extraordinary. They've thrown back tyrants, liberated death camps, carried out heroic rescues, and kept the peace in volatile regions. Above all, they have kept us free in the land we call home -- free to live as we see fit, free to work, and worship, and speak our minds, and choose our own leaders. All of this, we owe to the men and women who have taken that oath to defend America. And may the rest of us never take them for granted. (Applause.) 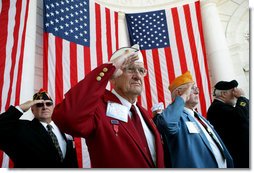 Gathered as we are today in a time of war, we're only more sharply aware of the nation's debt to the members of the armed forces. They are constantly in our thoughts. Our gratitude extends to their loved ones, because military service is often a family commitment, and they, too, are giving up a lot for the good of our whole nation.

General David Petraeus, our top commander in Iraq, recently said that our troops are operating in the "most complex and challenging environment imaginable." He added that they are the "best equipped force in our nation's history;" they are doing a "magnificent job" -- and that he is honored to serve with them. The conduct of our military today, as throughout our nation's history, makes this country very proud. And it's our prayer that they'll return in victory, safely home, to live out their lives and to be here to observe many Veterans Days to come.

Fellow citizens, I count it a true honor to be with all of you for this ceremony of recognition and gratitude. And to all the veterans here today: On behalf of the President and the entire nation, I offer the greatest respect and the most heartfelt thanks. You keep faith with America; your example of service and sacrifice inspires a new generation of freedom's defenders. May God keep us truly grateful for everything that you've done. May he protect those who serve today. And may He always watch over the United States of America. (Applause.) 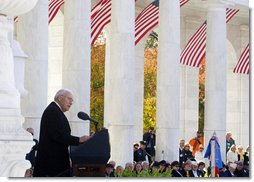