For Immediate Release
Office of the Press Secretary
November 8, 2007

President Bush Visits Wounded Warriors at Center for the Intrepid


Today, President Bush visited the Center for the Intrepid at Brooke Army Medical Center, Fort Sam Houston, Texas. The Center for the Intrepid, built thanks to the generosity of more than 600,000 Americans, is a world-class physical rehabilitation facility focused on medical and rehabilitative care of wounded warriors and veterans, injured in service to America. The facilities include a military performance lab, a pool, an indoor running track, a two-story climbing wall, and a prosthetics center. 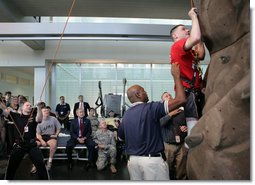 In March, President Bush signed an Executive Order creating a bipartisan commission to conduct a comprehensive review of the services America is providing our returning wounded warriors. Co-chaired by Senator Bob Dole and Secretary Donna Shalala, the President's Commission on Care for America's Returning Wounded Warriors released its findings on July 25, 2007, and the President immediately instructed the Secretaries of Defense and Veterans Affairs to implement the Commission's six recommendations that can be done administratively:

President Bush recently sent Congress legislation to implement the recommendations that require Congressional action. Congress should respond to the President's leadership and consider this legislation promptly to bring the highest quality care to those injured while protecting our freedoms.

On October 30, President Bush nominated Lieutenant General James B. Peake (Ret.), M.D., to serve as our Nation's Secretary of Veterans Affairs. Dr. Peake is a twice-wounded and highly decorated veteran of the Vietnam War, who recently served as the U.S. Army Surgeon General. His career spans over 40 years in the field of military medicine.

Congress must act quickly to confirm this highly qualified nominee, so that he can begin the hard work that lies ahead of him. This includes continuing to implement the reforms recommended by the Dole-Shalala Commission and building on the Administration's work to provide the best care possible to America's returning wounded warriors.

If the FY08 Budget request is enacted, President Bush will have increased funding for veterans by 77 percent since taking office. The President has submitted a budget of nearly $87 billion for our veterans - the highest level of support for veterans in American history. President Bush calls on Congress to send him a clean veterans' spending bill as soon as possible, so our Nation's veterans do not pay the price for Congress' inability to get its most basic work done.